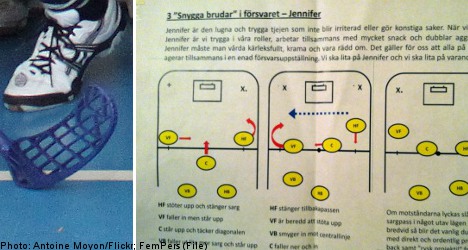 The controversial materials sparked a media storm when they became public in January and reference strategies known as ”Petra”, ”Jennifer” and ”Sofia”.

They were devised by the coach to show the boys on the FBC Engelholm floorball team how to play in various circumstances.

According to the strategies, referred to as ”hot babes on defence” (Snygga brudar i försvaret), “Sofia” is “hot and sexy” and likes to ”dress provocatively” and ”help herself in bed”.

”By snogging and feeling up Sofia at the right moment we will reach the optimum result,” the notes read.

”In bed, you can rip her clothes and spank her bottom.”

“Petra” meanwhile, “scratches, bites and likes to dominate” and “gets in the mood when you are aggressive”.

The coach had been suspended shortly after his materials became public pending an internal investigation by FBC Engelholm and Sylwander said it wasn’t expected that he’d be able to come back so easily, according to the paper.

However, Sylwander told HD that there were many reasons the coach was allowed to return, despite the fact that the man clearly had made a mistake.

“Many in the club place a lot of trust in him, not in the least among the players and the parents, which counts for something,” Sylwander said to HD.

Since the incident became known, the club has created a work group between the board, the parents and the area floorball association, to avoid anything similar to happen again.

So far they have met with sports and gender scholar Jesper Fundberg from the Malmö University and started devising an action plan against sexist behaviour.

“This has hit the club rather hard and we are treating it very seriously,” said Sylwander to HD.

The man is now back coaching the 14-year-old boys.

“As far as I know, he started coaching the team again this week,” Sylwander confirmed to HD.