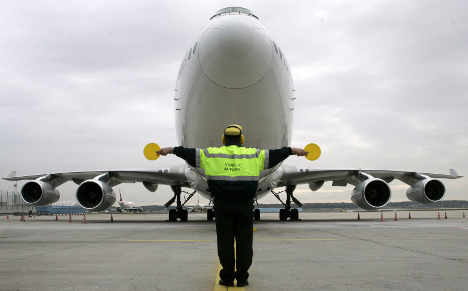 Both sides are blaming each other for the collapse in talks between the air traffic controllers union (GdF) and Frankfurt Airport operator Fraport late on Friday. GdF rejected the Fraport offer claiming it didn’t include many of the workers it represents.

The union has been pushing for a wage increase of up to 50 percent, shorter working days and larger bonuses, for “apron control” workers who guide the planes in and out of parking spots.

Workers manning “Follow–Me-Cars” which lead jets through the airport were cut out of the latest agreement proposed by Fraport, said a GdF spokesman on Saturday.

“We’ve offered the maximum we can from our point of view in the negotiations,” countered Fraport labour director Herbert Mai on Saturday.

Talks began last Thursday morning, putting a temporary halt to five days of strike action during which more than 1,000 flights were prevented from taking off or landing. About 165 of the roughly 1,200 daily flights scheduled to take off on Wednesday were cancelled, according to Fraport.

Fraport said Saturday it is “operatively prepared” for further strikes. About 80 percent of scheduled flights remained on schedule during the strike last week as temporary employees were trained to take over the duties of the striking workers.

Meanwhile, the GdF will be meeting on Monday to decide their next move, said a spokesman.