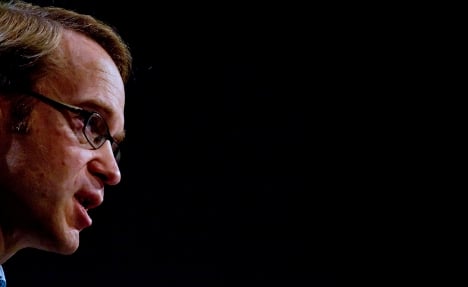 “Let me start by correcting a popular misconception… the mistaken view that Germany, while itself managing to dodge the flames of the current crisis, is now selfishly refusing to come to the aid of the stricken countries by acting as chief firefighter,” Bundesbank President Jens Weidmann said in a speech released Friday.

“Germany is doing a great deal to help its partners,” insisted Weidmann. Finance ministers and central bankers from the world’s leading economies will be gathering at the G20 meeting in Mexico City this weekend.

Countries from outside the crisis-stricken 17-nation eurozone want the bloc to boost its firewall to stop the drama spreading from Greece to bigger economies such as Italy and Spain.

The International Monetary Fund, as well as the United States, have suggested that the eurozone should combine its existing EFSF bailout pot with a permanent fund, the ESM, due to be launched in July.

This would give the eurozone a war chest of around €750 billion to reassure the markets that Europe has the means to combat future emergencies.

But Berlin has steadfastly refused, believing that with the Greek rescue all but tied up and a more relaxed market environment, there is no need to consider bolstering the firewall.

“Germany is acutely aware of the need to tackle the root causes and not just the symptoms of the crisis,” stressed Weidmann, adding that Germany was also bearing a “disproportionate” burden in rescuing the eurozone.

The central banker also kept up Berlin’s pressure on Greece, calling on Athens to “deliver on the promises that have been made” in order to secure a second bailout package to stave off bankruptcy.

“Ultimately, Greece cannot be forced to comply with the program. But it should be clear that no further disbursements will be warranted if Greece fails to keep its side of the bargain,” said Weidmann.