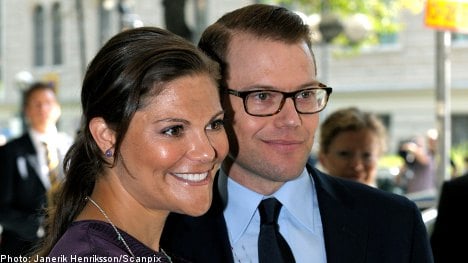 On Saturday, Crown Princess Victoria and Prince Daniel thanked their many well-wishers, in a statement published on the Swedish royal family’s website.

“A warm thank you for all the friendly greetings and congratulations we’ve received on Princess Estelle’s birth. We truly appreciate your support and that so many share our joy,” the new parents wrote.

In a formal ceremony on Friday, Sweden’s youngest royalty was blessed and received her name, but several traditions still remain to be observed.

Roger Lundgren, royal expert and editor in chief of Kungliga Magasinet, a magazine about royalty, believes that Victoria and Daniel’s daughter will be baptized in Stockholm’s Slottskyrkan church in June.

He also suspects that the godparent tradition that has emerged between Swedish and foreign royal families will lead to Princess Estelle having more godparents than the four that Crown Princess Victoria and her siblings have.

In the short time since her birth at 4.26am on Thursday, Princess Estelle has quickly become a very public person.

During her first day of life, more than 2,300 news stories were published about her in Swedish press, according to market analyser Retriever.

But Swedes weren’t the only ones interested in Estelle. International interest spawned some 3,300 articles worldwide.

Outside of Sweden, the biggest interest in the newborn princess was found in Germany, where nearly 800 articles were published.