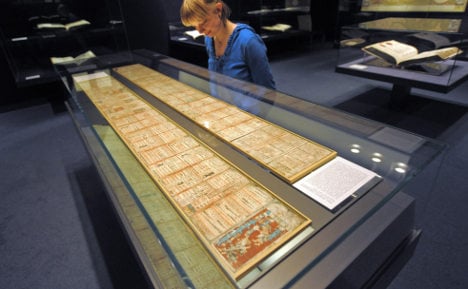 The 78-page book, also known as the Codex Dresdensis, which has been in the eastern German town since 1739, is being exhibited for the next few months in the Book Museum of the Saxon State Library.

Check out our picture gallery of the Mayan Codex in Dresden

The codex consists of 39 leaves made of bark, each around 20 centimetres long, encased in wooden lids and wrapped in jaguar hide. It is thought to have been written and illustrated in several phases the 13th century – when the high period of Mayan culture had already been dead for at least four centuries – by up to eight authors.

Despite the distance, researchers believe the book’s authors had access to and could easily read the old Mayan texts.

The codex is thought to have been sent to Europe in 1520 by Hernán Cortés, a Spanish conquistador who conquered the Aztec empire. He sent shiploads of treasure to the Holy Roman Emperor Charles V, who kept the gold and left the books to rot in the archives.

According to a report in Die Welt daily, the codex was rediscovered 200 years later in the possession of Viennese citizen by Johann Christian Götze, court librarian at the royal library of Saxony in Dresden. He bought it, but it took two more generations before researchers began deciphering it.

Legendary German explorer Alexander von Humboldt published five pages of the book in 1810, but it was not till 17 years later that French historian Constantine Rafinesque matched the hieroglyphs in the book to inscriptions on ancient stones in southern Mexico.

Further investigations eventually uncovered three other codices – in Madrid, Paris and Mexico City – but the Dresden book considered the most ornate and complete. It allowed Dresden librarian Ernst Förstemann to decipher the ancient Mayan calendar structure and number system.

Eventually, researchers used the Dresdner Codex to determine that the end of the 13th Mayan calendar cycle would fall on December 21, 2012. This date is illustrated in the book with the image of a giant crocodile spewing water from its mouth.

Sven Gronemeyer, a researcher of Mayan culture from North Rhine-Westphalia said last year that his decoding of an old stone tablet referencing 2012 has shown that the Native American civilization merely expected the return of one of their gods on that date.