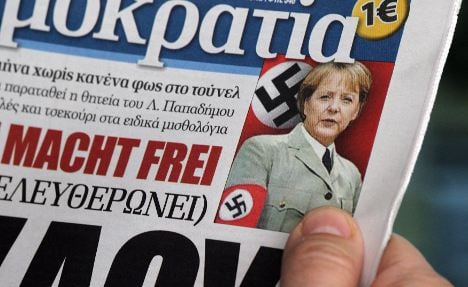 According to the English-language news site Athens News, Yiorgos Trangas used the term (translated literally as “dirty Berlin girl with an open arse”) twice during programmes in September and October 2011 on the Real FM radio station.

The Greek National Council of Radio and Television justified the fine by saying Trangas had used obscene language and abused the Greek language, the news site reported.

Trangas apologized Wednesday but referred to Greeks as “the Jews of 2012.”

Tension between Berlin and Athens has sharpened during the continent’s sovereign debt crisis, which many Germans have blamed on Greece. Many Greeks, meanwhile, have taken umbrage at what they feel is German meddling in the Greek economy.

During protests against Greek austerity measures, some protestors have worn Nazi garb to illustrate their anger against perceived German pressure on their government.

But among the most inflammatory incidents took place in 2010 when the German magazine Focus ran a picture of the Venus de Milo, one of the most famous works of Greek sculpture, brandishing a middle finger.

That led to widespread outrage in Greece, a libel lawsuit against ten journalists and accusations of German bias against the Greeks.