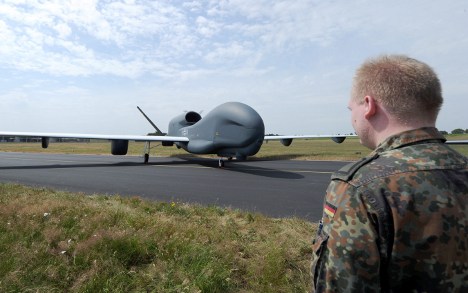 According to a report published Wednesday in news magazine Der Spiegel, an official parliamentary request from the socialist Left party revealed that Germany has around 70 drones in operation as part of its military mission in Afghanistan.

The German military, the Bundeswehr, also wants to order 16 new SAATEG VTOL helicopter drones, as well as five giant “Euro Hawk” drones, which have a range of 25,000 kilometres and can locate electronic signals and hack phone calls and text messages from a height of 20,000 metres.

Drones are currently among one of the favourite technologies among NATO countries, with the German government praising their “variety of applications” in a recent report.

“Unmanned Aerial Systems” (UAS), as the technical jargon has it, can not only be used for delivering weapons, but also for rescue missions, monitoring forest fires, police surveillance, counting wild animals and predicting harvests.

But civil rights advocates and some German politicians still have serious misgivings about drones, particularly in their domestic application.

Drones weighing more than 25 kilos can only be used above military training grounds in Germany, but police have used drones to monitor football riots and the protests against nuclear transport trains in Lower Saxony.

Der Spiegel also says that German police are increasingly using drones to patrol the country’s borders in the search for illegal immigrants and to patrol train tracks.

“Drones have the dangerous potential of secretly violating the privacy of citizens from the air,” she told the magazine. “We have to prevent their use for observing people.”