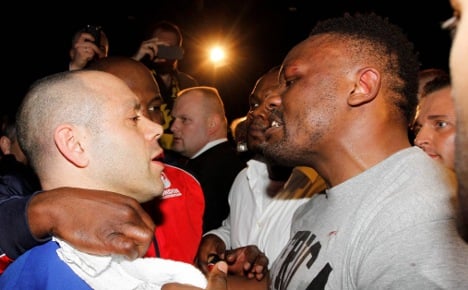 German police arrested both Chisora and his trainer Don Charles as they were preparing to board a plane back to Britain.

“Given the events of Saturday evening, a criminal investigation is required,” a spokesman for Munich police said.

Chisora is suspected of grievous bodily harm and threatening behaviour, the spokesman added.

Haye, 31, was working as a pundit for the Chisora-Klitschko fight, and was among reporters at a press conference afterwards, when he interrupted from the crowd, branding Chisora “a loser”.

Chisora promptly left the head table at the press conference to confront Haye, who he dubbed “an embarrassment”.

Haye, the former World Boxing Association (WBA) champion who was defeated on points by Vitali’s brother Wladimir in July, had insisted he wants to fight Vitali on June 2 and the pair traded blows with Chisora as their respective trainers became involved.

Adam Booth, Haye’s trainer, who was working at the fight for BBC Radio, was left with a cut head, while Haye was seen brandishing a cameraman’s tripod.

Chisora was repeatedly heard shouting that he would “shoot” Haye during a barrage of expletives as the pair was separated by stunned on-lookers.

Munich police also want to speak to Haye and searched his hotel room on Sunday morning, but according to sources he caught a flight back to Britain in the early hours.

The British Boxing Board of Control has already said it would launch an investigation into events leading up to the ugly melee in Munich when Chisora was heard to repeatedly shout that he wanted to “shoot” Haye and “burn” him.

Chisora, 28, has won few friends in Germany with his conduct after slapping Klitschko in the face at Friday’s weigh-in, then spitting water in the face of his opponent’s brother Wladimir, also a heavyweight champion, minutes before the title fight.

The Zimbabwe-born British fighter squared up to Vitali again after the fight verdict had been announced and received jeers and boos from the Munich crowd.

After seeing the drama unfold, Wladimir Klitschko, who holds the IBF, WBO and WBA heavyweight belts, told Sky News: “I’m totally disappointed, it went a little too far, the sport of boxing shouldn’t be like that.

“Bloody faces in the news conference… fighting in the ring, not out. I’m really surprised.”

Vitali, who defended his WBC title for the tenth time, despite an injured shoulder, said he did not respect Chisora as a person.

“If you are a sportsman with millions of people watching you have to set a good example, and Chisora didn’t do that,” Klitschko said.

“Young kids and boys were watching. I have got respect for Chisora as a fighter but no respect as a human being. He was not fair.