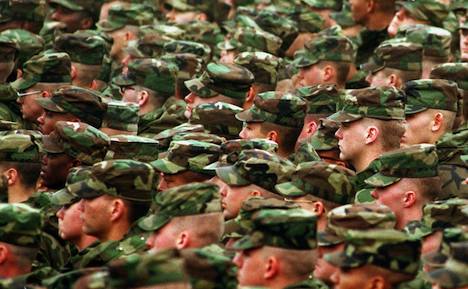 “No one should equate lower numbers of US troops permanently stationed in Europe with declining engagement with our European partners,” Pentagon press secretary George Little told reporters.

The details of the troop reduction, which include two Army brigades and two air squadrons, were announced as Defense Secretary Leon Panetta hosted his German counterpart, Thomas de Maiziere, for talks at the Pentagon.

Both men endorsed the drawdown at a joint press conference, with Panetta promising the move would not alter Washington’s commitment to the NATO alliance.

The Pentagon chief said over 40,000 American troops would remain in Germany and that “the new US defense strategy reaffirms the lasting strategic importance of the trans-Atlantic partnership with NATO allies such as Germany.”

He added that de Maiziere “understands the necessity of the shifts we are making as we work to implement our new defense strategy while meeting our fiscal responsibilities.”

De Maiziere said Germany would still serve a crucial role for US forces and said he could not complain about the Pentagon’s downsizing as his own government was carrying out a similar approach for German forces.

“I cannot criticize the United States of America for doing something that we ourselves do,” he said.

He added that the withdrawal of the American unit would have a “moderate” effect on the local economy.

Starting later this year, the US military will start pulling out two US Army brigades, two Air Force squadrons as well as about 2,500 support troops, officials said.

The two Army heavy infantry brigades and one of the Air Force squadrons, which flies A-10 “tank killer” aircraft, are currently based in Germany while the second air unit is located in Aviano, Italy.

The move will reduce the total number of American forces in Europe to roughly 70,000 from the current level of about 81,000, officials said.

Despite the drawdown, the Pentagon insisted the US military’s close partnership with NATO allies would continue and that units in the United States would rotate to European bases to pursue joint training and exercises.

The Army chose to cut the two heavy brigades while leaving in place two other brigades, one airborne and one employing Stryker vehicles, which represent a more agile formation in keeping with a new US strategy that sees large, tank-heavy ground wars as unlikely.

The downsizing also will include closing down the Army’s 5th Corps headquarters in Wiesbaden, officials said.

The US military footprint in Europe has drastically declined since the Cold War, when more than 270,000 troops were stationed on the continent at one point.

The two Army brigades due to leave, the 170th heavy brigade in Baumholder and the 172nd heavy brigade in Grafenwöhr, have 3,850 soldiers each and both have been on tours in Afghanistan, with troops from the 172nd still on the ground in Paktika province.

Soldiers and families from the 170th brigade will begin moving out this summer while troops from the 172nd will start departing Germany in mid-2013, according to a fact sheet from the Pentagon.

The two aviation units due to depart are the 81st Fighter Squadron in Spangdahlem, with 525 personnel, and the 603rd Air Control squadron, with 336 airmen.