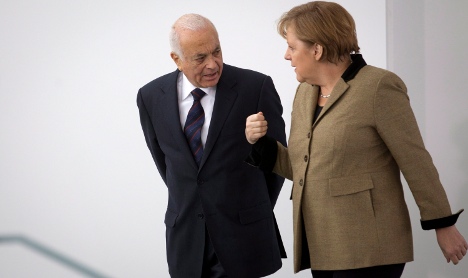 The EU supports the Arab League’s action to try to end the bloodshed in Syria and will “also support (it) through further sanctions”, Merkel told reporters, speaking alongside Arab League Secretary General Nabil al-Arabi.

The 22-member pan-Arab bloc agreed Sunday to ask the United Nations to send a joint peacekeeping force to Syria, where activists say more than 6,000 people have died in a brutal crackdown on dissent since March.

“What happens in Syria now is something that we in the Arab League should stop. The killing should stop,” Arabi told reporters. “The main focus of the resolution that was adopted three days ago… was to stop the killing right now.”

The EU plans to adopt a new round of sanctions against Assad’s regime on February 27, according to EU foreign policy chief Catherine Ashton’s spokesman Michael Mann.

Diplomats said last week that EU government representatives had endorsed three new measures, including an assets freeze against the central bank, a ban on Syrian phosphate exports and a prohibition on trading gold and gems.

The EU on Monday backed the Arab League call for a UN peacekeeping mission in Syria although France warned any foreign military action there would only worsen the situation.