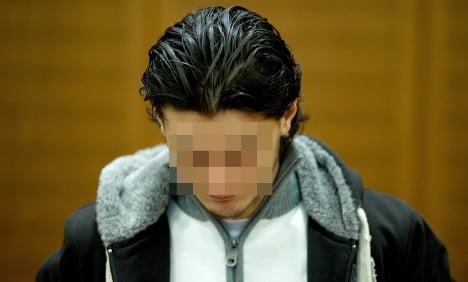 Arid Uka, 22, from Kosovo, was convicted of killing two soldiers and wounding two others when he opened fire outside the airport on March 2 last year on a group of US soldiers on their way to serve in Afghanistan, said the higher regional court in Frankfurt.

Presiding judge Thomas Sagebiel told the court: “The accused has been convicted to a life sentence for two counts of murder and three counts of attempted murder.”

Uka, wearing green trousers, a black jumper and a brown hooded top, appeared relaxed as the verdict was handed down, even smiling occasionally.

US soldiers Nicholas Alden, 25, and Zachary Ryan Cuddeback, 21, were killed in the shooting. Two other soldiers were wounded.

Sagebiel told the court: “He would have shot at a third, but the weapon got jammed.”

The verdict had already been postponed twice since the trial opened with Uka apologising to his victims and their families.

“On March 2, I killed two people and opened fire on three others. Today I can’t understand myself how I could have acted this way,” he said.

He said he had been influenced by “lies” and “propaganda” after seeing a video on the Internet purporting to show US soldiers in Afghanistan raping a local woman.

Defence lawyer Michaela Roth had not contested Uka’s guilt but argued that extenuating circumstances should allow him to be eligible for release after 15 years in jail.

“A jihadist would never have asked for forgiveness as Arid Uka has done from the first day of his trial. On the contrary he would have been proud of himself,” Roth told the court earlier.

Roth also argued that the video had probably brought back a childhood trauma to Uka, who she said was molested at the age of six.

A “saddened and outraged” US President Barack Obama said the day of the killings that Washington would “spare no effort in learning how this outrageous act took place.”

Prosecutors believe Uka, who was born in ethnically divided Mitrovica in northern Kosovo but who grew up in Frankfurt, acted alone and did not belong to a terrorist network.

Germany opposed the 2003 US-led invasion of Iraq but has more than 5,000 troops in Afghanistan, and has never suffered an attack by Islamic extremists, but a number of suspected bomb plots have been uncovered.

The September 11, 2001, attacks on the United States were planned in part in the German port city of Hamburg by an Al-Qaida cell led by Mohammed Atta, the hijacker of the first plane to strike New York’s World Trade Centre.

In March 2010 a German court jailed four Islamic militants who dreamed of “mounting a second September 11” for a thwarted plot to attack US soldiers and civilians in Germany.