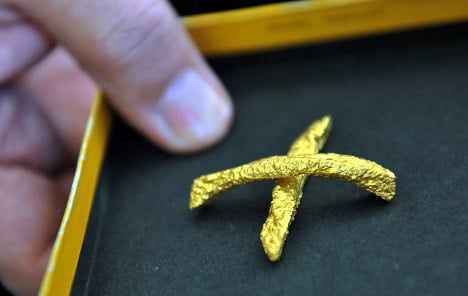 The artwork comprised a cross made of two golden chips, alongside two normal fries, deep-fried and not gold-leafed.

The catalogue for the original 1990 exhibition “Pommes d’Or,” described the work of artist Stefan Bohnenberger as “the metamorphosis of a profane everyday object into a sacred artwork.”

But the gallery’s reverence for the chips declined in the intervening decades, because when Bohnenberger asked for the two normal fries back last year, the Munich gallery Mosel and Tschechow could no longer find them. An incensed Bohnenberger promptly demanded damages, which the gallery refused to pay.

According to a report in news magazine Der Spiegel the court ruled that the gallery must now hand Bohnenberger €2,000 plus five percent interest from May 2010. On top of that, the gallery is being forced to pay 90 percent of the court fees.

The judge found that the gallery had neglected its duty to keep the chips safe.

Gallery owner Andrea Tschechow denied that the chips should be considered art. “There were crosses made of fries that were meant to be artworks, but not this one – this was just the model for the golden cross,” she said.

But a woman acquainted with the artist apparently provided the court with decisive evidence – she testified that she would have bought the chips for €2,500.

This testimony made the question of the fries’ artistic value moot. Court spokesman Wilhelm Schneider told the magazine, “The artist receives damages if the lost objects have an economic value.”