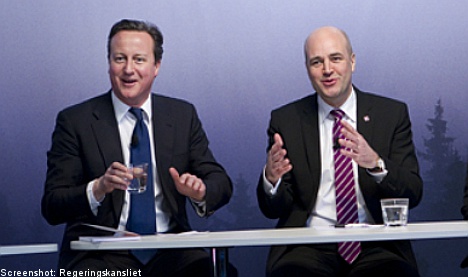 In an editorial on Thursday, Dagens Nyheter (DN) writes that behind the headline discussions on pension ages and women in boardrooms, the meeting might have a longer-term strategic purpose, at least for British Prime Minister David Cameron: to forge a long-term alliance between the Northern European countries:

Britain’s Financial Times offered a similar view, saying that Cameron, who has a long-standing friendship with Swedish PM Fredrik Reinfeldt, was looking to find allies to counterbalance French views on economic management:

“Behind the scenes, this “Northern Alliance” will also debate ways to frustrate a “French model” for the European economy; most of the nine leaders are opposed to stricter regulation and new taxes, notably a Tobin tax on financial transactions,” the FT wrote.

The British financial daily added that the affection was a two-way street, saying that despite French President Nicolas Sarkozy portraying Britain as an outcast, Swedish leaders view Britain as a valuable ally in pushing for pro-growth policies in the EU.

When launching the first Northern Future Forum in London last year, Cameron said “Right across the north of Europe, there stretches an alliance of common interests. At a time when much of Europe is in desperate need of funding economic reform, it makes sense for us to come together for the benefit of all our economies; an avant garde for jobs and growth.”

That Cameron wants to stress his affinity with the Nordic countries and with the Baltic states is in itself not surprising, DN writes, given their relative economic success in recent years.

But it warns that any move to create rival camps in Europe should be resisted.

The British prime minister likes to stress the country’s separation from the rest of the EU, not just in regards to policies but the way they are formatted, it points out.

The leader of the British Tories would like to get out of supranationally binding EU legislation in as many areas as possible, preferring loose and non-binding discussions like the meeting currently taking place in Stockholm, argues the paper.

But, the paper goes on to say, this would not be a good thing at a time when Europe could do with a “larger dose of British and Nordic attitude to trade, business and growth”.