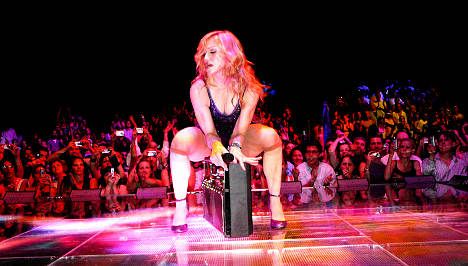 “It’s going to be fantastic, if nothing else, the Super Bowl performance gave a taste of what’s coming,” Kristofer Åkeson of concert promoters Live Nation told the Expressen newspaper.

Madonna is set to take the stage at Gothenburg’s Ullevi arena as part of her “Madonna World Tour 2012, in what will be her first concert in Sweden since 2009.

The tour will be her ninth since 1985’s “The Virgin Tour” and will be her biggest yet, with some 90 performances confirmed, US music website Billboard reported on Tuesday.

The 53-year-old Queen of Pop will start her tour in Israel, and will visit 26 venues in Europe alone. She will even make an appearance in Australia, where she has not played in over 20 years.

Last Friday, Madonna released a new single, “Give me all your luvin” just ahead of a much-hyped performance at the half-time show of the Super Bowl in the United States on Sunday night.

Her latest studio album, “MDNA” is set to be released on March 26th.

Tickets for Madonna’s July 4th concert in Gothenburg are set to go on sale on Friday, February 17th.