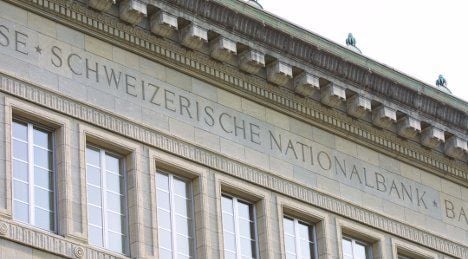 “This commitment applies at any time, from the moment the market opens in Sydney on Monday to when it closes in New York on Friday,” said Swiss National Bank (SNB) vice chairman Thomas Jordan.

“We will not tolerate any trading below the minimum rate,” he said in a speech at the Swiss-American Chamber of Commerce in Geneva.

The franc, considered a safe haven in times of financial turbulence, posted a sharp gain in value last year, going from 1.23 per euro at the beginning of July to less than 1.05 a month later. The franc was at 1.2088 to the euro in afternoon trade Tuesday.

The strong currency was biting into exporters’ earnings and the central bank imposed a 1.20 cap in September.

The vice president said a solution to the eurozone debt crisis would help reduce demand for the currency.

“If the European authorities were to credibly commit to a sustainable solution soon, existing uncertainties would be reduced substantially,” said Jordan.

“In such a scenario, demand for perceived safe financial assets would fall in general, and for the Swiss franc in particular.”

The SNB predicts the Swiss economy will slow considerably this year to 0.5 percent growth, down from the expected 2011 figure of 1.5 to 2.0 percent.

The incident occurred as the Swiss National Bank (SNB) held its annual general meeting in Bern, the Blick newspaper reported.

An unidentified woman sprayed the message 'please remember why we founded you' on the billboard in red paint.

According to the paper, the protestor was campaigning in support of the campaign for monetary reform, which goes to a nationwide vote in June.

Known as the Vollgeld Initiative in German and the Initiative Monnaie Pleine in French, the initiative calls an end to traditional bank lending and for the SNB to be the only financial institution able to issue money.

With the help of other activists, the spray painter removed the words a short time later.

Almost exactly one year ago an 86-year-old woman was arrested after spraying an anti-war message outside the SNB in a case that drew worldwide attention.

The peace activist spray-painted ‘Money for weapons kills' on the billboard.

She was campaigning on behalf of the Group for a Switzerland without an Army (GSsA) which had launched a popular initiative to ban Swiss financing of any company that produces arms.

If it gathers the required 100,000 signatures by October 2018, the issue will go to a national referendum.