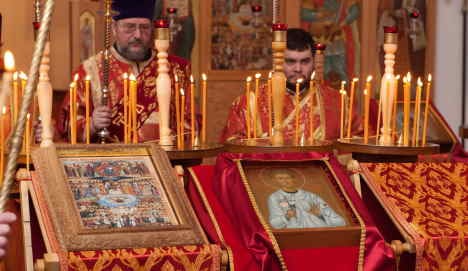 Schmorell, who was born in Russia, was celebrated as a new martyr in the church during a special service in the Cathedral of the Holy New Martyrs and Confessors of Russia in Munich on Saturday. He was 25 at the time of his death.

The White Rose, or Weiße Rose, was founded by a group of Munich students and their philosophy professor Kurt Huber, all of whom actively voiced their resistance against the crimes of the Nazi regime under Adolf Hitler.

In 1942, the group launched a graffiti campaign and began to distribute thousands of leaflets urging opposition to the National Socialist Party.

On July 13, 1943, Schmorell and Huber were executed, just five months after fellow White Rose members Sophie and Hans Scholl and Christoph Probst were put to death.

Archpriest Nikolai Artemoff has been working toward Schmorell’s canonisation since 1993, along with Archbishop Mark of Berlin, Germany and Great Britain of the Russian-Orthodox Church Outside of Russia.

“For us, he took a very important stance, rejecting both Bolshevism as well as National Socialism,” Artemoff said.

Schmorell’s last letter to his family reflected to the depth of his Christian faith. His niece, Alexa Busch, said the church was a “piece of home” for him, much like the Russian language.

“His faith was surely one of the reasons he was so free and independent,” she added.