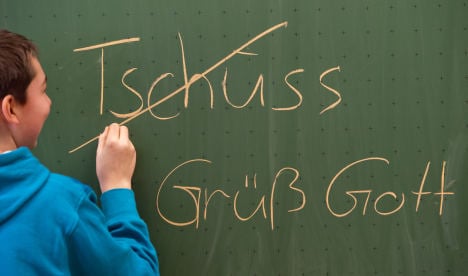 If students slip up, teachers are instructed to politely remind them to use the more polite Bavarian variants for hello and goodbye, “‘Grüß Gott” and “Auf Wiedersehen.”

The word “Tschüss,” which is heard everywhere in cities like Berlin when people part ways, apparently has few fans in southern Germany.

A sign posted inside her school reads: “We are trying to get by without both of these greetings in our school. However, we welcome a ‘Grüß Gott’ or friendly ‘Auf Wiedersehen’ any time.”

A spokesman for the Bavarian education ministry, Ludwig Unger, praised the action, saying young people must learn to behave differently when interacting with authority figures versus their peers.

“It’ is a positive sign of appreciation, but it should not be turned into dogma,” he said.

But the head of the Bavarian students’ association, 17-year-old Martin Zelenka, said the action has been a point of controversy. “The measure is a further step toward alienating teachers and students,” he said.