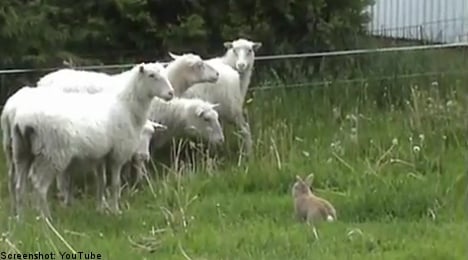 Champis the rabbit, owned by the Vigren family in northern Sweden, has attracted over 600,000 viewers in the week since the clip was posted, and even the owners themselves have been left scratching their heads about the rabbit’s talents.

“He learnt these skills himself, we had nothing to do with it,” Greta Vigren, the owner, told The Local.

“He surely has seen the dogs doing it before, but really, Champis thinks he is the king of the farm, and that he owns the sheep. He just likes to be in charge.”

The video was filmed by family friend and sheepdog breeder Dan Westman. Entitled “Champis – den vallande kaninen” (‘Champis – the herding rabbit’ in English), it shows five minutes of the bouncing bunny making light work of a small herd of sheep, a skill most likely mimicked from his border collie buddies.

The Westman family’s blog, “Gårdsbackens Blogg”, which was initially just an account of daily life as sheep owners and breeders of border collie sheepdogs, has seen an enormous surge in interest after people began to share the video.

The Westmans, like the Vigrens, are overjoyed with the response.

“Of all the comments we get about Champis, we are extra glad when we get comments from guys with attached profile photos where they look tougher than anything else, and they leave a comment like ‘Love it!!!’ That is what we like here at Gårdsbacken!!!” they wrote on the blog.

The reason for the video’s popularity is hard to pinpoint and Vigren doesn’t have an answer either.

“We have no idea why so many people are watching – perhaps you can tell me why?”

Vigren has heard of the comparison with 1995’s hit film “Babe” where a pig learns to herd sheep in an effort to prove his worth on the farm, but confesses she’s not seen the film – at least not yet, adding that it might make for nice viewing over the weekend.

Champis is a dwarf-rabbit, a European breed of bunny, smaller than a typical Swedish wild rabbit. However, Vigren refers to him as a “big dwarf-rabbit” in her heart.

While Vigren acknowledged that more rabbits may prove useful, she said that they are perfectly content with just one for now and they won’t be letting the fame get to his head.

“We want him to live his own life, to run free in the wild, we understand this is a unique thing,” she said.

“The truth is, the video is cute and sweet, and if it makes people happy then we’re happy,”she told The Local.

See Champis the herding rabbit below