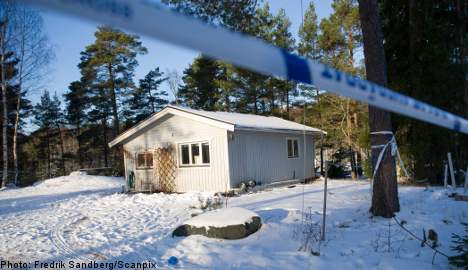 “I saw through the window that she lay there on the floor,” next door neighbour Fredrik Ståhl, who found the woman, told newspaper Aftonbladet.

According to Ståhl, he had seen a taxi through the window, pulling in to the couple’s drive next door just after midnight.

Some time later, there was a knock at his door, and the murdered woman’s boyfriend stood there, ‘on edge and worked up’.

“He came running, out of breath, and screamed that his girlfriend lay dead on the floor,” Ståhl told the newspaper.

“I went into the living room, checked her pulse, and noted she was dead. She had a kitchen knife stuck in the middle of her back and she lay on her stomach. Beside the body was another knife, but I don’t know if it had been used,” Ståhl told the paper.

The call to emergency services was made just before 1am.

Ståhl said that the pair was generally seen as quiet and pleasant, and that he had never noticed any signs of violence in the six months that they had been neighbours.

Friends who were out to dinner with the pair on the night of the incident claim that the man was drunk, and forced the woman to return home with him, even though she wanted to stay out with her friends.

Police have arrested the boyfriend on suspicion of murder, and would not comment on the case on Sunday. After a preliminary hearing on Monday, police spokespeople confirmed that the man denies all allegations against him.

“He says that he was at the pub and came home and found her,” said defence lawyer Stefan Persson to Aftonbladet.

According to the paper, the couple were together on and off for one year before the woman was killed.

“We got a message that everyone had to evacuate immediately, so everyone started to run, including me,” a witness told SVT.

Filip Annas, a spokesperson for the Malmö police, said that the operation had been launched after a member of the public reported seeing a person with a “weapon-like object” at the entrance of the mall.

“We have found a person who matches the description but have not found a weapon,” he said. “We are continuing to search thoughout Emporia and will hopefully complete the operation shortly.”

By 3pm, police stated that they had searched the entire shopping mall, had not found anything suspicious and no longer deemed there to be a threat.

On August 20th a 31-year-old man was shot dead in broad daylight in the shopping centre, while a woman who happened to be standing near to him suffered a bullet wound.