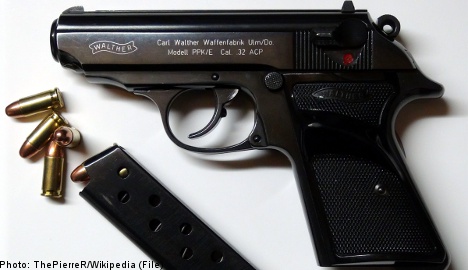 At the time of the incident, Öhrlund was posing on the streets of central Stockholm for pictures that were to be used on the cover of his new book entitled “Till minne av Charlie” (‘In memory of Charlie’).

In an effort to make the images more dramatic, Öhrlund was holding a replica of the Swedish police’s former service weapon, a Walther pistol.

But the site of Öhrlund brandishing the weapon prompted Swedish police to approach the photo shoot with their own pistols drawn.

“They forced me and my friend to the ground. We had to lie there 20 minutes with handcuffs while police stomped on my injured back with their boots,” Öhrlund told the newspaper.

Both Öhrlund and the photographer were placed under arrest and forced to spend four hours in a holding cell at a Stockholm police station.

While Öhrlund faulted police for not releasing him as soon as they realized the gun he was holding was fake, police disputed his claims that the gun was a mere replica.

“It’s not true that it was bought at a hobby shop,” detective Ewa Edman told Aftonbladet.

Rather, police believe the weapon was genuine, but had merely been plugged.

Öhrlund nevertheless told the newspaper he plans to report the incident to internal affairs.