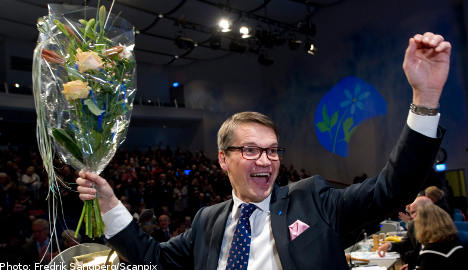 With 198 votes for Hägglund and only 88 for Odell, the victory was clear. Nonetheless, the turmoil and internal criticism Hägglund has faced recently has divided the party.

Hägglund has been under fire periodically following the party’s poor showing at the 2010 election and after a string of weak opinion polls.

Whilst the Christian Democrats are one of the four ruling centre-right wing parties in government, the party is the smallest of the four, and opinion polls continually showing support for the party is at risk of slipping below the 4 percent threshold required to maintain representation in the Riksdag.

Odell and his followers felt at odds with the socially liberal direction in which Hägglund was moving the party.

Göran Hägglund was relieved after the vote, one of few in Swedish political history in which a sitting leader was challenged at the party conference.

“My job now is to reunite the party, and make sure we’re all pulling in the same direction. I think the preconditions for this are good,” said Hägglund at a short press conference following Saturday’s vote.

Many Christian Democrats, also among those who support Hägglund, have demanded that the party be tougher, not least in negotiations with the other governing parties.

“We haven’t been sufficiently clear outside the negotiation room, about what we’ve managed to accomplish. But we have succeeded, roughly, with everything we promised voters,” said Hägglund.

According to challenger Mats Odell, it was necessary for the party to have an open brawl about party leadership, in order to vent all tension.

“Obviously it hasn’t been a magnet for voters, but it was necessary to speak openly, and now get a definite response. This is a base on which to continue healing our party,” he said to news agency TT after losing the vote.

“The results were clear, and a clear end to this. I will support Göran Hägglund and work with whatever tasks the party thinks I can contribute with.”

Odell hopes to be allowed to continue as head of the Riksdag’s enterprise committee, and as group leader for the Christian Democrats in the Riksdag.

Several MPs have questioned his suitability. But Odell doesn’t see any problem with his staying on.

“I have a third of the party behind me, and I think it would be good for the party’s healing process. But I’ll leave it to the Riksdag group to decide.”