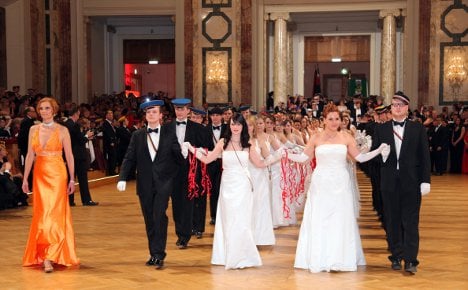 Around 2,500 people demonstrated against the Burschenschaft Ball, often dubbed, “an international gathering of right-wing extremists,” in central Vienna on Friday.

They managed to delay the beginning of the ball slightly, but were kept away from the opulent Hofburg Palace by police.

Of the 20 people arrested at the demonstration, “One was German, who was found to be carrying explosives,” said a Vienna police spokesman although no further details were released.

Members of Germany’s far-right National Democratic Party (NPD) have attended in the past. This year it was held on the same date as with International Holocaust Remembrance day.

Franz Obermayr of Austria’s right wing Freedom Party called the ball “a symbol of the love we have for our Fatherland,” earning huge applause from the guests.

The Burschenschaften are male student fraternities which can be found in Germany, Austria, Switzerland and even as far flung as Chile. They are often criticised as right-wing, reactionary and nationalist.

Members follow strict social codes and at black-tie events such as the Burschenschaft Ball they wear full uniform. Tradition dictates that all members must fence, and because protective clothing is not allowed, many have striking facial scars which are displayed with pride.

The protest against the Vienna ball included bus-loads of demonstrators from Berlin, North Rhine-Westphalia and Frankfurt.