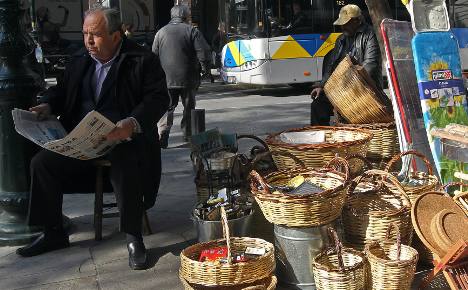 “There are discussions and proposals in the heart of the eurozone, including one from Germany” to “reinforce control over programmes and measures already in place,” a European source said.

The source was confirming a report in the British Financial Times newspaper, that Germany’s plan was for a commissioner appointed by the other eurozone finance ministers to be able to veto budget decisions made by the Greek government.

The report came as Greek officials were in talks with private creditors on a major debt write-down to avoid a looming default, and ahead of a meeting of EU leaders in Brussels on Monday focused on a new fiscal pact.

“Budget consolidation has to be put under a strict steering and control system,” the Financial Times quoted the proposal as saying, adding that it had been circulated by Germany on Friday to officials from other eurozone countries.

“Given the disappointing compliance so far, Greece has to accept shifting budgetary sovereignty to the European level for a certain period of time.”

The European source said: “A clear priority has to be given to reducing the budget deficit… In Greece, there is a particular problem of a very decentralised budget policy. A constraining legal framework could bring more coherence and ease and accelerate the decision-making.”

“External expertise on the ground could be run by European institutions and could also have certain decision-making powers,” the source said, requesting anonymity.

But Greece dismissed the idea amid increasing resistance in Athens to demands for ever greater sacrifices.

“There is effectively a ‘non-paper’ that was presented to the eurogroup,” a Greek government source told AFP in comments echoed by others.

“Greece will not discuss such a possibility,” said the source. “It is out of the question that we would accept it, these are matters of national sovereignty.”

Such a move would “require a change in (EU) treaties.”

Greek Education Minister Anna Diamantopoulou, a former EU commissioner, slammed the idea as “the product of a sick imagination” in an interview with Mega television.

The latest row comes as Greece’s three-party coalition, ranging from socialists to the extreme right, is showing signs of cracks under the strain of battling the debt crisis.

The coalition was formed in November after socialist Prime Minister George Papandreou was forced from office for his handling of the crisis.