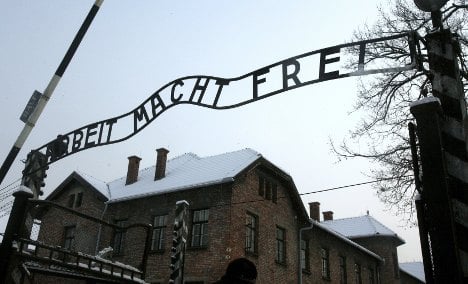 Jan Riebe’s aunt was visiting him in Berlin a few years ago when she suggested they visit the city’s sprawling Holocaust Memorial in the heart of the German capital.

His aunt was around 75 at the time and living in western Germany. She had worked for many years in the fur business, where she maintained that she dealt a lot with Jews.

As the two listened to a guide’s explanation of the exhibit, his aunt leaned over and made a remark about the guide.

“He has to be a Jew. I recognize that from the fur industry,” she said.

Riebe, who heads the anti-Semitism department at the Amadeu Antonio Foundation, offered the story as an example of the not so hidden stereotypes many Germans have of Jews. The foundation is named after an Angolan guest worker who was murdered by neo-Nazis in 1990 – one of the first racist murders following the fall of the Berlin Wall the year before.

A study sponsored by the German parliament the Bundestag that was officially presented this week showed that some 20 percent of Germans harbour “latent” anti-Semitic views.

Riebe and others say the figure may be low.

“I think it’s actually higher,” said Wolfgang Battermann at a reception for the 12th annual Obermayer awards on Monday. Battermann was one of five award recipients this year of an honour presented to non-Jewish Germans who have made outstanding voluntary contributions to preserving the memory of their local Jewish communities.

Battermann and several other award winners talked about the difficulties they had getting information and of resistance by some who didn’t want to deal with their town’s Jewish past.

“Most people weren’t so open about it,” said Werner Schubert, a former Hitler youth leader and Nazi soldier, who dug up information about the Jewish community in the Saxony town of Weisswasser. After years of work he brought to light the accomplishments of Joseph Schweig, a German Jewish industrialist who was largely responsible for the town’s growth.

Schubert, a small man in his late 80s, said he told an acquaintance about his efforts to uncover Weisswasser’s Jewish past. The acquaintance – an army officer in what was once communist East Germany, couldn’t understand why Schubert would bother with the Jews. “First the Germans persecuted the Jews, now the Jews are persecuting the Germans,” Schubert said he was told. But he stressed that this was an exception: “Most people aren’t so open about this.”

Which is what the Bundestag-backed study said. Riebe noted that Germans know that people who openly offer anti-Semitic remarks can be prosecuted under German law, so they keep their views private. But he suspects classical Jewish stereotypes – like the one his aunt expressed – namely that Jews are involved in luxury goods – or others such as Jews all have a lot of money, or that Jews are cheap, abound.

He said if people are asked in a survey if they have anything against Jews, they will say no, whether that is true or not, because “they know they have to answer with no.”

On Friday, Holocaust survivors and others will commemorate the 67th anniversary of the liberation of the Auschwitz, a notorious concentration camp where up to 1.5 million people were murdered by the Nazis.

Riebe said his organisation – the Amadeu Antonio Foundation – works to combat racism of any kind and offers workshops to combat anti-Semitism. Some of the topics include being aware of Israel-related anti-Semitism, that is when individuals or groups use their criticism of Israeli policy as a backdoor cover for their anti-Jewish views.

He believes that anti-Semitic sentiments can be reduced, but Germany will never be complete free of them.

“There will always be a certain base for anti-Semitism. You can reduce it, but you can’t get rid of it,” he said.