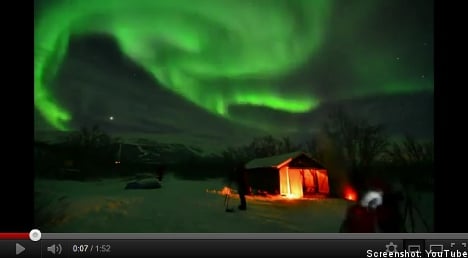 Sweden's far north was treated to a spectacular northern lights display earlier this week as a massive storm of solar energy bombarded the earth's atmosphere.

The solar storm, billed as the strongest in six years, treated stargazers to an incredible display of pulsating colours that ebbed and flowed across the night skies.

According to Hans Norén, head of the Swedish Tourist Association's Abisko Mountain Station, bookings at the station have more than doubled since last year as increasing numbers of tourists venture past the Arctic Circle to catch a glimpse of the northern lights.

“December 2011, which kicked off the start of the northern lights season, was the best ever,” he told Sveriges Radio (SR).

Read also: The Local's ultimate guide to travel in Sweden

And things are likely to only get better, as scientists predicting a peak in an 11-year cycle of solar eruptions sometime in 2013.

A time-lapse sequence produced from stills taken in northern Sweden during the January 2012 solar storm.

Read also: The Local's ultimate guide to travel in Sweden