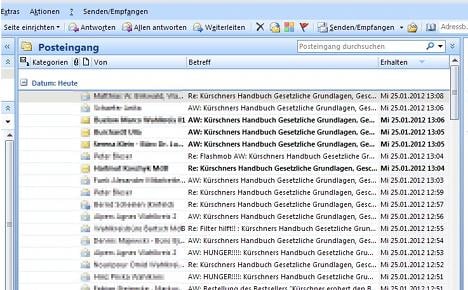 The employee working for Green party parliamentarian Sylvia Kotting-Uhl accidentally CC’d all 620 Bundestag MPs, their staff members and administrative workers on her email, according to a report in the Financial Times Deutschland.

It wouldn’t have been a big deal, but hundreds of those people responded, and in their responses CC’d the people Kottin-Uhl’s employee originally had.

Each time someone made a comment on the situation, they emailed it to the entire Bundestag list, creating a snowball effect that overwhelmed the system, the newspaper reported.

And the responses grew increasingly bemused and nonsensical. A sampling: “Greetings to my mommy,” or “In Hannover-Linden it is three degrees, dry and partly cloudy” and “You’re all a little nuts.”

As the day wore on, the Bundestag’s administrative office warned parliamentarians to stop playing with their email.

“The current misuse of the email system may cause delivery delays of up to 30 minutes,” the administration wrote, as quoted by the FTD.

By the end of the day, the chaos had died down. But it left the employee in question bemused.

“It just happened,” she explained her faux pas to the FTD.