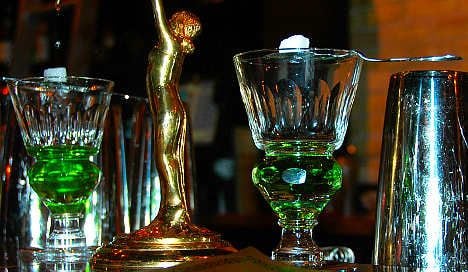 A recent episode of CSI: Crime Scene Investigation, a CBS series, features a character who is incited to murder after quaffing the legendary eau de vie.

The show, which airs on the Swiss television channel TSR1, infuriated producers of absinthe in the Neuchâtel region of Val-de-Travers.

“To pretend that absinthe can kill someone is not very intelligent,” Yves Kübler, vice-president of the absinthe producers’ association told Le Matin newspaper.

The strong liquor, with roots in Neuchâtel that go back to the late 1700s, was banned for much of the last century because of medical concerns about its addictive qualities and its contents, which include wormwood aniseed mixed with grain alcohol.

But now it is enjoying a trendy revival, with various brands offering versions with alcohol levels ranging from 45 to 74 per cent.

In the CSI episode, the murderer drinks some of the liquor, nicknamed the “green fairy” because of the colour it turns when water is added, before committing his crime.

A scientific team analysing particles on the victim concludes that plants used to make absinthe can cause hallucinations.

But Pierre Bonhote, the cantonal chemist for Neuchâtel, said the episode was in “bad taste”.

Bonhote told Le Matin that it was only during the prohibition period in the early part of the 20th century that absinthe contained a substance – thujone – in large enough quantities to induce hallucinations.

Now that component is limited to 35 milligrams per litre, “absinthe is no more dangerous than pastis,” he said, referring to the French liquor.

Distillers are worried that the television show is giving absinthe a bad name – not to the Swiss who are familiar with the drink – but to potential American customers.

The US only legalized absinthe in 2007. But Kübler, the fifth generation of a family that began distilling the liquor commercially in 1863, exported 300,000 bottles to American clients over the past five years.

A clientele, in a manner of speaking, to kill for.

In a joint press release, Geneva, Vaud, Neuchâtel, Fribourg, and Jura announced on Wednesday that the decision to re-open restaurants and cafés “was made in a concerted manner and with a desire for harmonisation and clarity” among the neighbouring regions.

Of the French-speaking cantons, only Valais restaurants will remain shut, as the canton had extended its closures until December 13th.

Authorities noted that the decision to re-open was driven by the steadily declining coronavirus infection rates in the regions, which until the first week of November had been among the most impacted in Switzerland.

Cantonal officials said that the re-opening “will take place in a strict health framework. It will be mandatory to consume seated and provide contact details for tracing. There can only up to four people per table.”

Tables must be at least 1.5 metres apart and masks must be worn if customers are not seated.

Additionally, establishments must remain closed between 11 pm. and 6 am, in accordance with federal rules.

Authorities said they would monitor “for the possible effects of the re-opening on the pandemic. This means the decision can be revoked if the health situation requires it”.

In Vaud, electric heaters will be allowed outside the restaurants to encourage customers to eat outdoors.

READ MORE: IN NUMBERS: Reasons to be optimistic about the coronavirus situation in Switzerland

Other measures will also be lifted

For instance, in Vaud museums will re-open on December 1st, and religious services will resume with a maximum of 30 people. They will have to wear masks and keep the 1.5-metre distance.

Also in Vaud, more relaxed measures will be put in place for the holidays: from December 18th to January 3rd, the limit for gatherings will be raised from five to 10 people.

However, participation in other public or private events will remain limited to five people.

In Geneva, the Council of State announced on Wednesday that museums, exhibition halls and libraries will be open from November 28th.

This new relaxation comes after hairdressers, beauticians and other wellness services resumed their activities on Saturday.

Until then, all non-essential businesses in Geneva had been shut down since the beginning of November to curb the canton’s alarmingly high contamination rate.

You can see the situation in other Swiss cantons here.