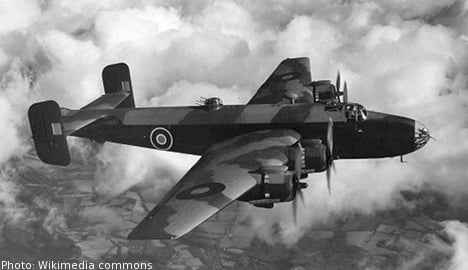 A Halifax mark 3 bomber plane - not the plane mentioned in the article.

“When we got down there we expected it to be a rock, but as we pulled off the seaweed we saw that it was metal parts,“ said diver Lasse Carlsson local paper City Malmö.

The discovery, which has been kept a secret since this summer, occurred during a university-funded expedition to explore the ocean environment in the region.

The coast guard registered objects on the seabed some 10 kilometres outside the Kämpinge bay. When the divers went in for a closer look, they discovered metal scrap parts spread over a 100-metre radius.

“It is a really interesting find. It is the first time in at least ten years that a plane with machine gun ammunition has been found in Swedish waters,” said research engineer Kjell Andersson to the paper.

The discovery has been kept a secret since the divers came across the wrecked aircraft during the summer.

Not only did the researchers fear that hobby divers might tamper with the historical remains but the site was potentially very dangerous until the Swedish military had destroyed the live ammunition still contained in the plane.

“The ammunition could be very dangerous,” said Andersson.

Swedish military divers have now assessed the site, taking photographs of the find to decide whether the ammunition should be brought to the surface or destroyed on site.

It is impossible to know for certain, but the metal scrap is believed to be the remains of a plane recorded going down in the area on August 3rd, 1943.

According to the City Malmö paper, the plane was struck by lightning and, having lost two of its four engines, the seven man strong crew decided to ditch the plane and take their chances in neutral Sweden.

After bailing over Skåne County, all the men survived. Regional history has it that the pilot, reportedly last to leave the plane, landed on a cow in a nearby field.

After questioning a six months internment, the crew was returned to the UK.