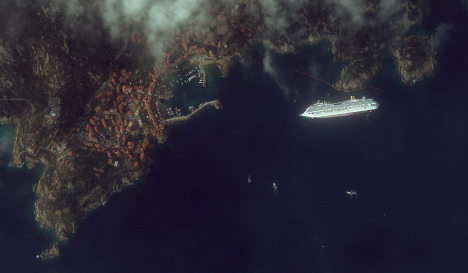 Eight bodies have been identified so far. Police commander Rocco Carpenteri said on Sunday that one of the victims was a German male, but would not provide further comment.

Divers recovered a twelfth body on Saturday, as they scrambled to search the ship amid fears it could be shifting into deeper water.

Of the eight victims identified so far, seven are male. Four French passengers were among the dead, as were passengers from Italy, Spain, Hungary and now, it has been confirmed, Germany.

Franco Gabrielli, who is heading the search effort, said 24 people were still classified as missing, and that it was possible that the four unidentified victims were not on that list.

The Costa Concordia ran aground near Giglio Island nine days ago, with more than 4,200 people on board. The investigation into how the wreck happened has centered on the ship’s captain, Francesco Schettino.

He has accused the cruise company, Costa Crociere, of planning the risky manoeuvre, according to an Italian newspaper. The company blames Schettino for the accident.