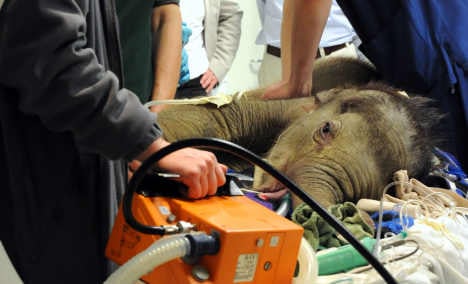 Lola would have become the first elephant in the world to have the surgery, a complicated operation planned by a team of vets and heart surgeons.

The elephant was taken to the Grosshadern Hospital for a CT scan, so that vets could take a closer look at her heart before operating. She was anaesthetized, but died during the scan, despite attempts to resuscitate her.

Keepers at the Hellabrunn Zoo first thought the three-month-old elephant had a cold when she seemed to be tired and short of breath in December. Her condition did not improve with antibiotics.

Ultrasound testing on Wednesday revealed her heart defect, which resulted in a dangerous blood clot in part of her heart.

“It was always our biggest fear that the clot in the heart would cause an embolism, which would mean immediate death,” zoo director Andreas Knieriem said.

“Unfortunately, that is exactly what happened.”

It is the second baby elephant from the Hellabrunn Zoo to die within 18 months. In June 2010, veterinarians had to euthanise Jamuna Toni, a six-month-old elephant, who was in poor health.

An autopsy revealed multiple bone breaks, leading vets to believe that Jamuna Toni was suffering from a metabolic bone disease.