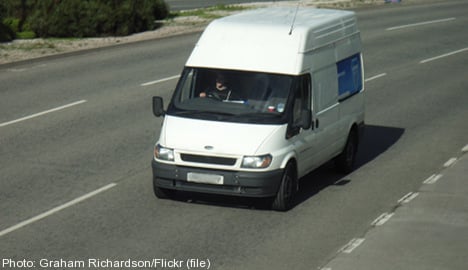 “We have heard about a white transit van for some ten years, but this has much to do with the fact that this is the most common type of van. I am convinced that there is no particular person in a particular white van looking for children,” detective inspector Ludvig Sandberg told the Dagens Nyheter daily.

The most recent report of the phenomenon, which is also a common feature of police work in a slew of other countries, came in from parents at Aspudden and Johan Skytte schools in the Stockholm suburbs of Aspudden and Älvsjö.

This information, which led to warnings sent out to parents by the respective schools, has been dismissed by south Stockholm police.

“It can be enough for a white car to stop at a pedestrian crossing… I would say that for the most part this is an urban myth,” Ludvig Sandberg said.

Australian criminologists came to the same conclusion in 2009 and explained that the stories play on parents’ greatest fears and thus easily generate hysteria, according to reported on ABC news.

Swedish police were able to confirm last year that not one single crime of this type was on record connected to the existence of a white transit van.

Ludvig Sandberg told Dagens Nyheter that despite reservations the reports are taken seriously but that the flow of reports complicate police work.