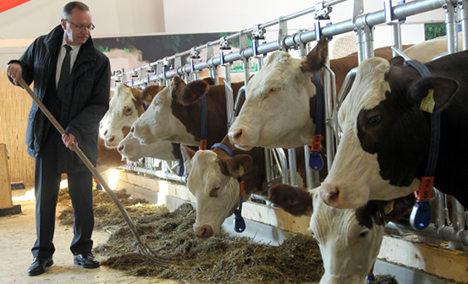 “Consumers who today complain about so-called factory farming, have ultimately supported exactly this type of farming with their purchase of cheap food and extreme price consciousness,” Heinrich Graf von Bassewitz of the National Union of Farmers (DBV) told the Neue Osnabrücker Zeitung on Thursday.

The International Green Week runs from Friday to January 29, featuring food and exhibitions from around the world. But it has become a lightning rod for criticism of industrial farming, particularly after recent reports of excessive antibiotic use in German farms.

The German government is keen to demonstrate its support for the more human, environmentally-aware elements of the industry.

Aigner said she wanted farmers to make more efficient use of the most resource-rich and valuable land and also wanted to see animal rights strengthened. And under new plans being drawn up, a special label would be put on food products verified as having been produced in a humane way, she said.

In the long run, she told television network ARD, food prices would have to increase.

Germans demand for meat at low prices has made maintaining high standards difficult, she said, because mass production of meat on the cheap is only possible from factory farming.

DVB President Gerd Sonnleitner said his members would sign up to Aigner’s ideas, although they could mean “heavy costs for our farmers.”

Though Germans are known for demanding high standards in their food, they have also been criticised for being extremely frugal consumers.

A study by the Federation of German Food and Drink Industries last year found that Germans pay less than shoppers in Italy, Spain or Great Britain.