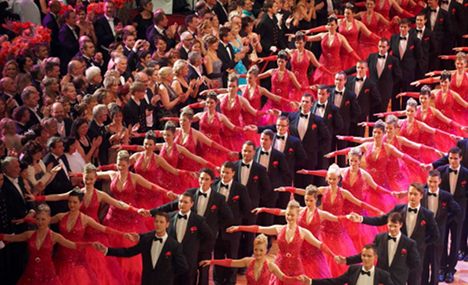 Stephan von Bothmer is the most celebrated silent film accompanist in all of Germany. Truly one of a kind, the composer and pianist performs two pieces this weekend written especially for the Berlin Cathedral’s magnificent organ. Watch Berlin: Symphony of a Great City and The Battleship Potemkin as Bothmer sounds the pipes.

With his new collection, Spanish designer Ricardo Ramos pays tribute to the strong women of the early twentieth century who influenced fashion during the time between the two world wars. See his elegant ensembles at a fashion show Thursday at Babylon Mitte. Antonio Morenos’ 1932 Mexican drama Santa screens with English subtitles immediately following.

A pair of accomplished Japanese artists perform together at the Neuer Berliner Kunstverein Sunday. Gidayu-Shamisen player Yumiko Tanaka has performed professionally for over three decades, while author Yoko Tawada has published novels in several languages. Go and see what the duo can do with words and music.

The Semper Opera Ball is Dresden’s equivalent to the New Year’s Eve celebration at Times Square in New York. Join the exuberant masses at Theatre Square Friday night for dancing under the stars. Curious to know what’s going on inside? Just look up at the big screens broadcasting all the action.

The German artist Anja Czuioska has toted her Super 8 camera from Frankfurt and Berlin, to Paris, London, New York, and San Francisco. She’s got an eye for the most interesting bits of the world. See twenty years of the filmmakers work Wednesday.

If the way social orders developed and changed interests you, you’ll want to stop by the Frankfurter Kunstverein Thursday night (or if you could be any character on Downton Abbey you’d be Branson the chauffeur). The art association’s new exhibition “Demonstrations. Making Nominative Orders” examines “public articulation of power, doubt, and protest.” Go to the opening and get an artistic take on injustice, and what we’re gonna do about it. People got the power!

The seven artists featured in Frankfurt’s Museum of World Cultures’ new show spent time out in the field to create their art. Interestingly, the “field” was the actual museum. See a film shot in the museum store rooms, drawings and photographs taken in Ethiopia in 1934, and other fascinating aspects of anthropological art and documentation. “Object Atlas – Fieldwork in the Museum” opens Tuesday night with the artists in attendance.

A label just for the ladies. That’s what Catharina Boutari had in mind when she founded Pussy Empire Recordings ten years ago. The singer unleashes her feisty vocals Thursday night at Grünen Jäger where she joins label mates and other guests for a girl power throw down.

The Tombak is an old Iranian hand drum, and Mohammad Reza Mortazavi is one of its most modern practitioners. Be astounded by what the virtuoso can do with the traditional Persian instrument when he takes the stage Saturday at Gasteig’s Black Box theatre.

2012 is the year to give back. It could be anyway. Only you can make it happen. Help out the Red Cross, be a big brother, or adopt a grandma. All sorts of ideas will be available for the picking at the Munich Volunteer Fair. New Year’s resolution number one. Check.

Pour yourself a glass of wine and take a sip. Is it oaky or is it earthy? Fruity or flowery? How’s the finish? Can you describe the bouquet? The world of wine is wide, wonderful, and oh so wordy. Learn everything you always wanted to know about wine Wednesday at