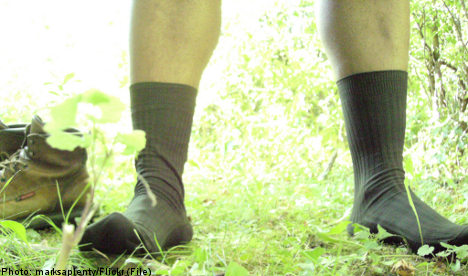 The man, referred to as Percy in local media reports, had just finished serving a two-month sentence for unlawful driving when he was released from the Brinkeberg prison in Vänersborg in western Sweden.

However, he re-entered society wearing only a shirt, socks, and underwear.

According to Percy, the he can no longer fit into the pants he was wearing when he was arrested in Uppsala last autumn.

But when he sought money from the prison to purchase new clothes, his request was denied.

In its decision, the prison service explained that Percy had 800 kronor ($118) among the personal items he was entitled to reclaim upon his release and that all he needed to complement his apparel was a new pair of shoes, which the prison argued he could purchase himself, the local TTELA newspaper reported.

But Percy only got wind of his clothing allowance rejection a few days before his scheduled release.

“I wasn’t able to send for extra clothes from home in time,” he told the newspaper as he stood pantless outside the prison in below-freezing temperatures.

“Now I’m standing here and I don’t know what I’m going to do next.”

While the prison had a shop that sold pants and shoes to inmates preparing to re-enter society, Percy thought paying 300 kronor for pants and 350 kronor for shoes would have meant he had almost no money left for food.

After getting a ride into nearby Trollhättan, however, Percy was eventually able buy shoes and pants at an acceptable price before catching a train to take him back to his home in Stockholm.

Prison official Peter Andersson was at a loss to explain why it took more than a month to process Percy’s clothing allowance request, a process which normally only takes five days.

According to Andersson, Percy is likely the first inmate to leave Brinkeberg prison without any pants.

“I don’t think [it’s ever happened before],” he told TTELA.