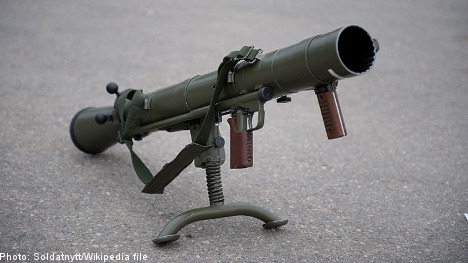 Military training teams have been left stumped as to where the grenades may have ended up when it was discovered the supply of training projectiles was a few rounds short when it arrived at its destination.

The training team in Boden, northern Sweden, is operating under the assumption that the grenades went missing along a 2.5 kilometre stretch of road during the transportation of ammunition to the depot at the I-19 army base.

A grenade search was launched, and the area was combed over thoroughly, including 20 metres off to each side of the road.

As of late Thursday afternoon, however, no grenades had been found, and the search was called off.

Wilhelm Guldbrand, a spokesperson from the I-19 base, guessed that someone likely found the grenades on the side of the road and took them home.

The grenades are meant for use with the m/48 model Carl Gustav recoilless rifle.

While Wilhelm claims the grenades are safe, he told the local Norrbottens Kuriren newspaper that the weapons “should not be handled, or even touched, by the inexperienced.”

While the grenades, which are meant for use in a grenade launcher, lack warheads, they nevertheless contained active propellant charges, and are used in army training excercises.

The weapons are in pairs, and the three packages carrying the missing munitions are described as being 50 centimetres long and 25 centimetres high.

Wilhelm urged anyone with information to contact the military immediately.