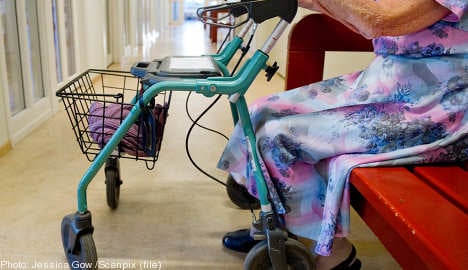 “It can be heavy and demanding with this type of patient. But I was surprised when I heard what happened and understood that the woman has worked for a long time in the industry. Of course it is completely unacceptable,” said the chairman for the social welfare board (Socialnämnden), Jan-Olof Sewring, to local paper Helsingborg’s Dagblad (HD).

The incident occurred about a week ago at a care home for the elderly in southern Sweden.

The 90-year-old man reportedly suffers from dementia, which causes him to sometimes act threateningly toward staff, often using foul language, according to HD.

But last week the woman, a hospital orderly that has worked for many years within the care sector, had enough of his antics when she met him in the corridor of the home, and started shouting at the man, waving her fist in the air.

She allegedly shouted that she would kill him if “he ever did that again”, according to the paper.

When other staff swiftly pulled the man back into his flat to try to calm the situation down, the orderly allegedly followed and continued to hurl abuse at the confused man.

After another member of staff had made a lex Sarah report, obliging staff in the care industry to report instances of mistreatment to the social services, the orderly was brought in to see the manager to explain her actions.

She allegedly admitted to having lost her temper, saying that she found it difficult to contain her anger. Talking to the other staff, her employers found that this had been obvious on previous occasions as well.

“But the investigation has so far not unearthed anything that could lead to further reports,” said the manager of the care home to HD.

The woman has since been dismissed and might be facing more serious consequences than losing her job, as the matter has also been reported to the police.

The woman’s threat to “kill” her patient might be enough to charge her with threatening behaviour, according to the paper.

CONFRONTING CORONAVIRUS
Some Swedish care homes have had no cases of Covid-19 – what did they do right? 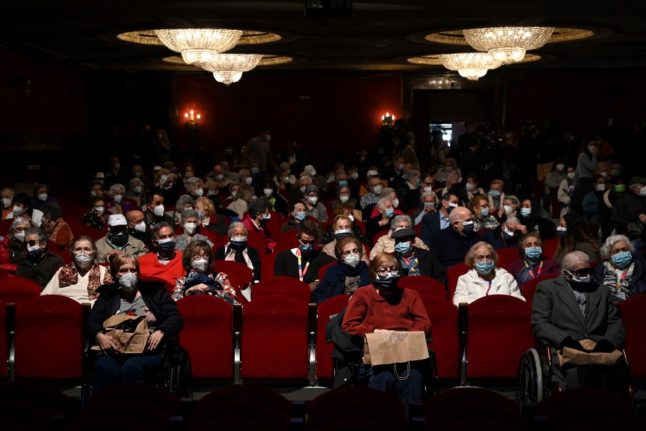 Ahead of the outing, 98-year-old Milagro Fernandez painted her nails, curled her hair and pulled on a fur coat over her lace blouse.

As she enters the lobby of the nursing home where she lives, the staff break into applause: it's a huge moment for this tiny elderly lady who caught Covid last spring but recovered.

Heading out the door, she boards a minibus with three other residents: 87-year-old Antonio Alonso, Concha Martinez, 90, and Jose Tellez who is 92.

It's a very big day for them as they head off for the bustling heart of Madrid to a theatre on Gran Via, the city's busiest shopping street.

“Shall we have something to eat afterwards?” wonders Tellez, who like all of them is struggling to hide his excitement.

It's been an entire year since they last left the retirement home where they live and were able to walk the city's busy streets.

“I'm almost more excited than them!” grins Laura Egea who runs the home and would have loved to have gone with them.

When the virus first hit last spring, it ravaged this home of 180 residents, claiming “dozens” of lives, says Egea, her eyes welling up at the unspeakable memories.

In early December, a government report estimated that between 47 and 50 percent of deaths in the first wave of the pandemic occurred in elderly care homes.

Spain has so far counted more than 68,000 deaths and more than 1.3 million cases. 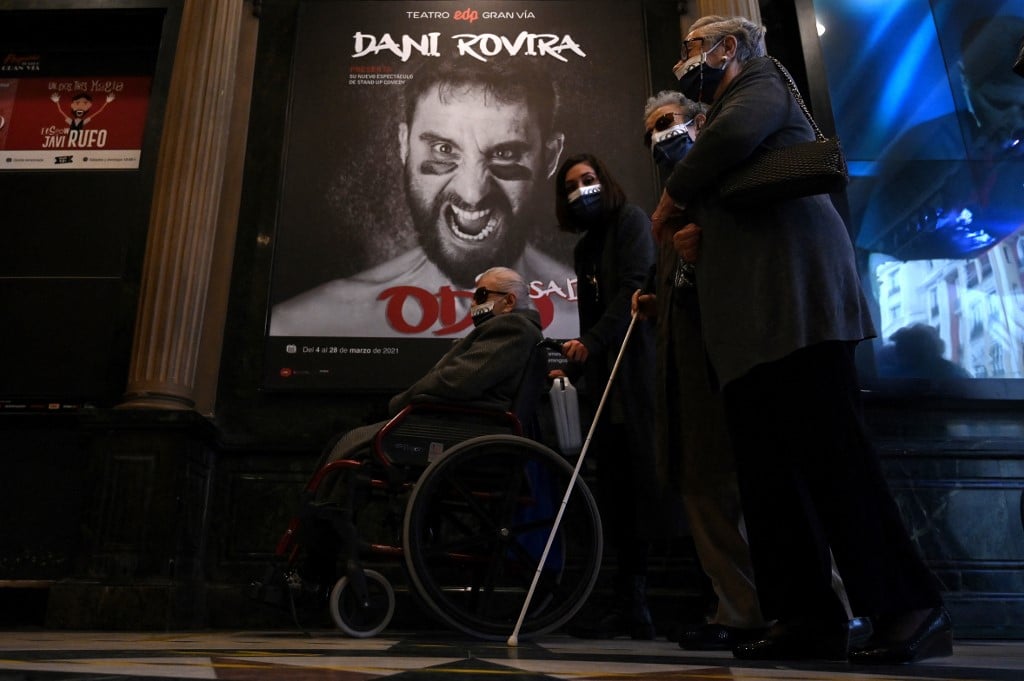 Time to have fun

Inside the minibus, they chatter on excitedly with one pointing out her former hair salon, another talking about restaurants while a third is directing the driver. “Turn left here, it's much better.”

In front of the EDP theatre on Gran Via, dozens of other buses have parked with their silver-haired passengers slowly getting out.

In the lobby, there is a sea of zimmer frames. In the auditorium many put their walking sticks under seats.

Today is a special day with the theatre inviting 150 vaccinated pensioners from seven Madrid care homes along with 50 carers, who have also been immunised, to see a one-man show by the actor Santi Rodriguez.

But the real show is not on the stage — it's the pensioners themselves, with a gaggle of reporters on hand to witness this first trip out for the newly-vaccinated.

For these elderly theatre-goers symbolise the return to normality that everyone hopes the vaccine will bring — even if they are still wearing masks and sitting at a distance from each other.

“I missed seeing so many people together, there are just so many of us,” says Conchita Martinez.

Nearby sits Milagro Fernandez in her red velvet seat, all smiles as the curtain goes up. 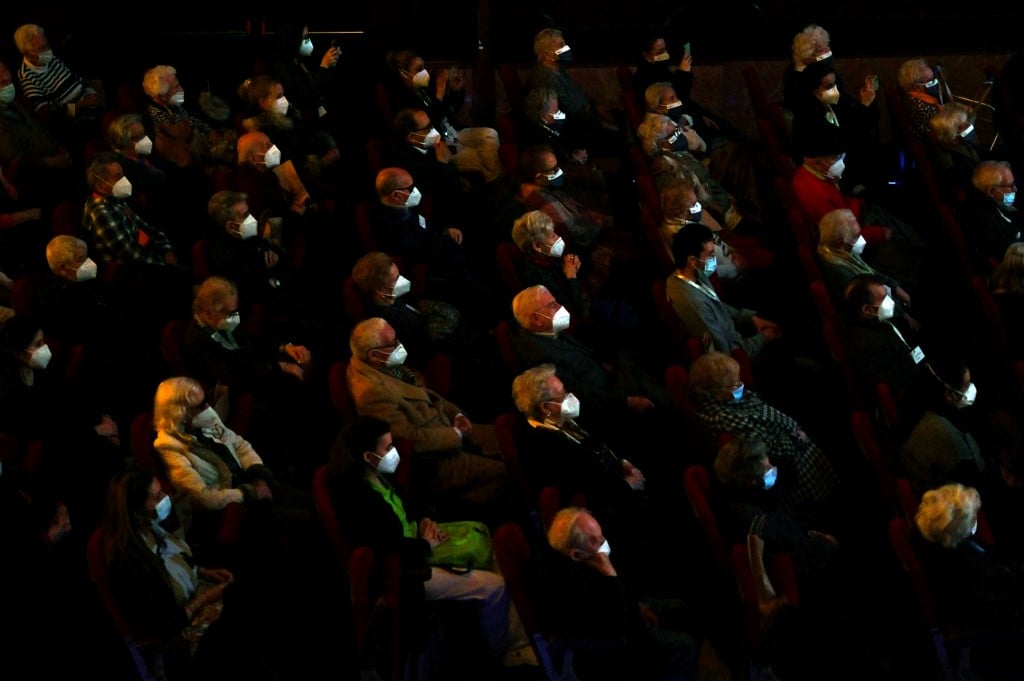 'Time to enjoy ourselves again'

Half an hour of jokes and laughter brighten up this chilly February morning nearly a year after the pandemic took hold in Spain.

When the show is over, everyone dashes to the loo with Antonio Alonso grumbling about the queue.

“It has been such a long time, but little-by-little we're going to start enjoying things again,” says Fernandez, her eyes twinkling.

Clotilde Frias, who runs events at the home and is the only staffer to go with them, says the relief at being able to go out is immense.

“The excitement has been the biggest thing. I think I was the most excited — along with Milagro!” she smiles.

“Truth is, we're very happy to have been able to go out. After a year and 10 days, it's about time!”

As well as receiving the vaccine, going out has given them “a healthy dose of vitality, enthusiasm and tremendous optimism,” she adds, saying this first trip out is only the beginning.

“We'll do it again and do whatever they want: go out, eat and have fun!”

So far, some 1.2 million people have been vaccinated in Spain since the start of the immunisation campaign which began just after Christmas with care home residents first in line along with their carers.