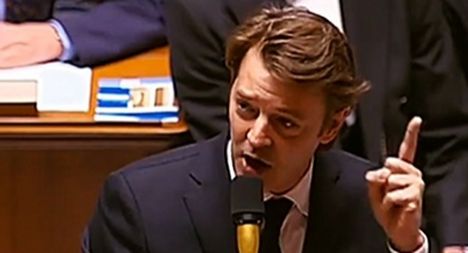 The sale, an attempt to raise between €7.5 billion and €9.5 billion (between $9.5 billion and $12 billion), will be watched keenly to see whether France will pay higher yields or whether the markets will shrug off the downgrade as they did last year when S&P downgraded the United States.

“An investment is rarely risk free, which is why its often profitable. But a risk-free investment does exist, that’s an investment in the sovereign wealth of our country,” he said on Monday.

“France is a great country with a solid … diversified economy, a skilled workforce, a highly resistant banking system and a high savings level,” Baroin said.

“So we can have confidence,” he said, adding that the S&P downgrade needed to be kept in perspective. “This is one message among others.”

If President Nicolas Sarkozy’s government finds itself saddled with high yields on Thursday, it will call into question the credibility of his deficit reduction plan and plunge the eurozone into further turmoil.

An unsuccessful auction would also likely to hit Sarkozy’s re-election hopes with only three months to go before a presidential vote.

Facing a tough challenge from Socialist candidate Francois Hollande, Sarkozy is desperate to shore up his economic credentials.

France successfully sold 8.59 billion euros in short-term bonds on Monday, paying a lower rate of interest than at a previous similar auction despite the loss of its triple-A.

But analysts said Thursday’s auction will be the real test.

“The longer-term debt auction on Thursday is much more of a challenge,” said Kathleen Brooks, research director at trading site Forex.com.

“Last week we saw good demand for short-term Italian debt, but a lukewarm reception to longer-dated securities issued by Rome. If that happens at the French auction on Thursday then we could see a sharp decline in euro-based assets.”

But she added: “There isn’t much of a relationship between a sovereign rating downgrade and a deterioration in credit market conditions. When the US was downgraded in August 2011, 10-year treasury yields fell to their lowest-ever level six weeks later.”

In its last long-term bond issue on January 5th, France raised just shy of €8 billion. Analysts described demand in that auction as “solid” but France was forced to pay slightly higher interest rates.

The rate on France’s benchmark 10-year bond rose to 3.29 percent in that auction, up from 3.18 percent during the last long-term bond issue on December 1st.

Last month, France said it will need to raise €178 billion in medium- and long-term bonds in 2012, slightly less than last year, as the state will have to meet a budget deficit of €78.7 billion and repay €97.9 billion in debt.

Struggling to get its public finances under control, the French government has imposed two deficit-cutting packages aimed at saving a total of €72 billion since August.

It has said it needs to save €100 billion to balance its budget by 2016 but Sarkozy has vowed no new austerity measures ahead of the election in April.