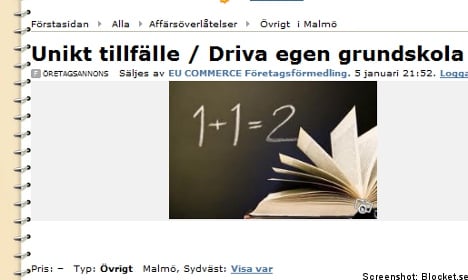 “Ever dreamt of starting up your own primary school?” begins the advert on Swedish buy-sell site Blocket.

“Then we have a great opportunity for you!”

The ad has been placed by an agent representing a seller from Malmö in southern Sweden, who claims to have spent the last year gaining accreditation to run the school from the Swedish Schools Inspectorate (Skolinspektionen), resulting in a permit to run a school with an enrollment of up to 180 students.

But now the school, registered as Malmö enskilda grundskola, is being sold – despite not being anything more than a permit and a name, for 500,000 kronor ($71,278) according to Svenska Dagbladet newspaper (SvD).

According to the seller, the school could be up and running by the beginning of the autumn term this year.

The advert explains that all the hard work has been done and that if an interested buyer wanted to “avoid the red tape for an ambitious and serious start then this is a fantastic opportunity”.

“The only remaining work to do is to find a suitable location for the school, new staff, etc.,” reads the ad.

Should a sale of the permit take place, it would entail that the buyer would be free operate a school without first having been vetted by the Schools Inspectorate.

However, according to current laws, there is nothing prohibiting such a transaction.

“There is no obligation to report to us if the shares in a company which has a permit to run a free school are sold,” Anna Sundberg, division head for permit assessment with the Schools Inspectorate, told SvD.

“It’s the company that has the permit to run the school and therefore is the principal legal entity is still the same.”

In the wake of the Green Party’s Amin called for a change in the law to prevent similar transactions from occurring in the future.

“It is one thing when someone has run a school for several years and then can’t any longer, but here someone has not even started up the business. We must change the law – this is totally awful,” he said.

Rossanna Dinamarca, education policy spokesperson for the Left Party also slammed as “inappropriate” and “strange” both the ad and the notion that someone would seek a permit to run a free school to then simply sell it on to another party.

“This is something that needs to be reviewed,” she told SvD.

“It is completely unacceptable and I find it extremely provocative that someone who sought and received permission to run a school acts in this way,” Swedish education minister Jan Björklund told SvD in response to reports about the advert.

“The question of who is serious enough to run a school and therefore receive the permits will be decided by the Swedish Schools Inspectorate, not by a company broker or by those who have already got a permit,” he said.

Björklund proposed that permits should be tied to schools and to their owners and that a change in ownership would require a new owner to seek a new permit. According to Björklund, such a change would make the transaction advertised on Blocket “impossible”.

More than half a million primary- and middle-school-aged children spend a large part of their school days and holidays in after-school centres.

But the right to after-school care is not freely available to all children. In most municipalities, it is conditional on the parent’s occupational status of working or studying. Thus, attendance varies and is significantly lower in areas where unemployment is high and family finances weak.

In this context, the previous government formally began to inquire into expanding rights to leisure. The report was recently handed over to Sweden’s education minister, Lotta Edholm, on Monday.

“The biggest benefit is that after-school recreation centres will be made available to all children,” Andersson said. “Today, participation is highest in areas with very good conditions, while it is lower in sparsely populated areas and in areas with socio-economic challenges.”

Andersson recommends recruiting staff more broadly, and not insisting that so many staff are specialised after-school activities teachers, or fritidspedagod.

“The Education Act states that qualified teachers are responsible for teaching, but that other staff may participate,” Andersson said. “This is sometimes interpreted as meaning that other staff may be used, but preferably not’. We propose that recognition be given to so-called ‘other staff’, and that they should be given a clear role in the work.”

“People trained to work with children can contribute with many different skills. Right now, it might be an uncertain work situation for many who work for a few months while the employer is looking for qualified teachers”, Andersson said.