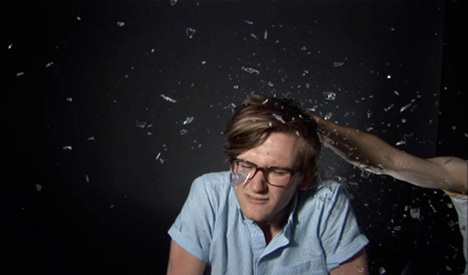 Stories about sad bears and Stasi dogs come to life on the big screen this week at the 5th Lichtspielklub Short Film Festival. Dame Judi Dench stars in Chris Foggin’s 12-minute comedy about online dating, which screens at Thursday’s opening series followed by a live band and DJ.

When 25 young artists put their heads together and produce a spontaneous group show you can expect the atmosphere to be charged. Get infected by youthful talent Friday night when the 25-day exhibition of paintings, photography, drawings, prints, lithography, installations and videos opens in Berlin.

Once a month the soprano Maja Fluri hosts a gathering of visual, literary, and performing artists at the elegant Belle Etage hotel on Lietzen Lake in Charlottenburg. This month features works by painter Bernhard Grychta, and performances by actor Armin Sengenberger, tenor Oliver Uden, and pianist Giedre Kiseviciene.

The Return of the Gods

Prussian royals had a thing for Olympus, Dionysus, and other Greek and Roman gods. A new exhibition at the Roman-Germanic Museum in Cologne brings together a collection of reliefs, vessels, and statues from ancient Greece to the Roman Era.

Musicians from the Frankfurt Opera and the Museum Orchestra occasionally perform concerts geared toward a younger set. And by young, we mean six-years-old and up. Take the tots to see a one-hour performance of Pinocchio Sunday.

Didn’t get a chance to see “Tommy” last month? You’re in luck, The English Theatre Frankfurt extended their production of Pete Townshend and Des McAnuff’s epic rock opera until April. Get acquainted with the “Pinball Wizard” this week when the anglophone troupe performs The Who’s Tommy. ”See me, feel me, touch me, heal me.”

Maybe you’ve heard stories about the great storm that ravaged Hamburg half a century ago leaving a tremendous flood. It was a major event in Hamburg’s history, and if you live there, or are just visiting, you should know about it. A new exhibition at Ballinstadt, Hamburg’s museum of immigration, drops quite a bit of knowledge about the devastating event. See photos and read first hand accounts from survivors when it opens Friday.

Once a cotton mill, Leipzig’s Spinnerei is one of the coolest spots in Germany to see art. Since 2005, an array of artists and galleries have set up shop in the sprawling historic complex, and each season they band together for a full day of art openings. The former factory turned cultural centre hosts its winter gallery tour Saturday. Get inspired by 20 new art exhibitions.

Cinema from Egypt, Tunisia, France, Italy, and other countries lucky enough to be located on the Mediterranean Sea screen this week in Munich. Many deal with Arab Spring themes and most are shown with English Subtitles. Don’t miss Ahmad Abdalla’s Microphone, a portrait of the underground music and art scene in Alexandria, Egypt, which will be shown at the festival opening Friday.

A trio of accomplished composers of varying stripes are the focus of a concert this Saturday at Residenz. Emilio Pomarico conducts the Bavarian Radio Symphony Orchestra through works by French composer Olivier Messiaen, South Korean composer Younghi Pagh-Paan, and the 103-year-old American composer Elliott Carter.

A 17-year-old American girl spends a month with a Turkish family on the Aegean coast and learns about cultural differences, family ties, and summer love in Saskia E. Akyil’s new novel Secrets of a Summer Village. The Munich-based American author reads from her book

Saturday at the Munich Readery followed by a reception with Turkish wines and pastries.