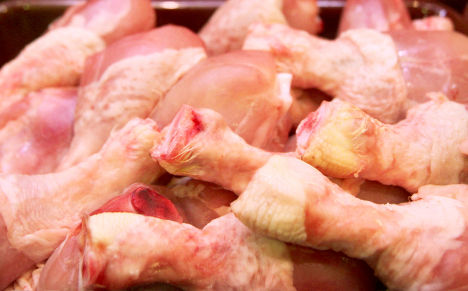 Of 20 samples of fresh chicken meat bought in five cities around Germany, 12 were found to have antibiotic-resistant bacteria, said researchers from environmental group Bund (Friends of the Earth Germany).

They bought chicken at various supermarkets in Berlin, Hamburg, Cologne, Nuremberg and the Stuttgart region, and sent it for testing. Ten samples had microbes which produce ESBL (Extended Spectrum Beta-Lactamase) enzymes, while two had MRSA (Methicillin-resistant Staphylococcus aureus) bacteria.

Both can be deadly for people vulnerable to infections, as they are resistant to the most widely used antibiotics. Such resistance has emerged as antibiotics have been excessively and improperly used and mutated bacteria form new disease strains.

The testers bought chicken from some of Germany’s most popular supermarkets such as Edeka, Netto, Lidl, Rewe and Penny.

Although Bund admitted its test was no more than a snapshot of the situation, the group’s chairman Hubert Weiger said, “Every second chicken sample from German supermarkets is contaminated with antibiotic-resistant germs. That is the shocking result of the continued abuse of antibiotics.

“This is not only responsible for the fact that important medicines could lose their effect. The extent of the contamination of foodstuffs with hospital germs is a clear warning signal of the collateral damage of industrial animal farming.”

Bund said keeping many animals in limited space – intensive farming – was only possible with the use of antibiotics. Weiger called on Agriculture Minister Ilse Aigner to limit or even ban industrial animal farming. Subsidies for such farming methods should be scrapped while the conditions under which animals are kept must be decisively improved, he said.

Added Bund agricultural expert Reinhild Benning: “Even healthy animals get the antibiotics because in industrial animal farming it is the rule that whole animal stocks are treated with them,” she said.

Aigner told the Hamburger Abendblatt newspaper on Monday that she intended to take a draft law into cabinet this week which would drastically reduce the use of antibiotics in animal farming. The aim is to limit the use of antibiotics to the absolutely necessary level and to increase the ability of regional authorities to check this is the case.

A study commissioned late last year by the North-Rhine Westphalia consumer protection expert showed that 96 percent of the more than 10 million birds being farmed in the state had been treated with antibiotics.