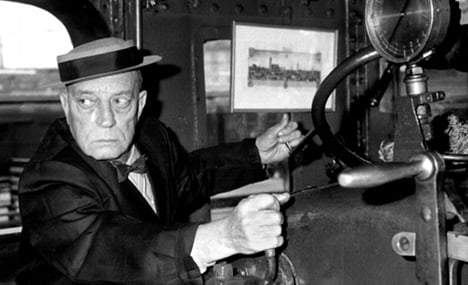 Under the radar gems screen this week at Babylon Cinema as part of the Unknown Pleasures festival of independent American film. Comedies and crime stories comprise a program that includes a trio of recent films by Martin Scorsese and a restoration of Nicholas Ray’s experimental masterpiece We Can’t Go Home Again.

The Ruins of Detroit

For lovers of opulent abandon, few metropoles are as fascinating as Detroit. Paris photographers Romain Meffre and Yves Marchand captured the city’s extraordinary eeriness in a set of large format photos, which hang at Kuehlhaus Berlin until Tuesday.

Innovative young choreographers present new works this week in Berlin at Tanztage. The 21st edition of this esteemed festival of contemporary dance features an invigorating mix of movers and shakers in the indie dance scene. See works by An Kaler and Maria Francesca Scaroni opening night at Sophiensaele.

2012 marks the 25th anniversary of Cologne and Beijing becoming sister cities. In celebration, a program of fun and educational events is taking place in Cologne all year long. This Wednesday hop on board the MS Rheinenergie for a cruise around Cologne’s old town. Onboard entertainment includes Chinese music, dance, and acrobatics.

Humans. A rare and wonderful breed. Judith Joy Ross thinks so. Her portraits of everyday people taken at the park, the supermarket, or on neighborhood streets offer some insight into the vast spectrum of human beings, emotions and all. View a selection of the American photographers’ works at The Photographic Collection in Cologne.

Unwind and unplug Saturday when seven bands play acoustic sets at the Frankfurt club Orange Peel. “Acoustic music is a wonderful alternative to loud party music,” said organizer Christian Hansel in an interview for Joefrog.de. Would you agree? If the answer is affirmative, rock out to Lucid, Jank Kovik Band, and other amp-less music makers Saturday.

Alexander McQueen left the fashion world a bit shooken up when he took his own life just over a year ago. Hamburg’s MKG pays tribute to the visionary British designer in the new exhibition “Alexander McQueen – Inspirations.” On view are stunning creations from his last collection for Givenchy, where he was head designer from 1996 – 2001. Ooh and ah all afternoon.

Fans of German cinema may recognize the name Angela Winkler. The acclaimed actress of theatre and film added “vocalist” to her resume last summer when she released her debut album Ich liebe Dich, kann ich nicht sagen at the age of 67. See the leading lady sing songs about love and life Monday in Hamburg.

You’ve seen the arrivals hall, spent some time at the check-in counter, maybe sipped an espresso while you settled in at your gate. The airport is an exciting place, but you haven’t seen the half of it. Hop on a special nighttime bus tour this weekend at Munich Airport and get an insider’s view of the runways, landing strips, cargo halls, maintenance hangars, fuel depots, and even the airport fire station.

One of Hollywood’s biggest guns, Buster Keaton starred in and directed some of the most influential comedic films in the history of the movies. The Munich Film Museum’s Buster Keaton series starts Friday with four of The Great Stone Face’s early shorts. Take this rare opportunity to get to know the work of an American legend.

Get up out of your chair and clap those hands. The Original USA Gospel Singer and Band perform genre classics like “Go Tell it to the Mountain” and “Go Down Moses” Sunday night in Munich.