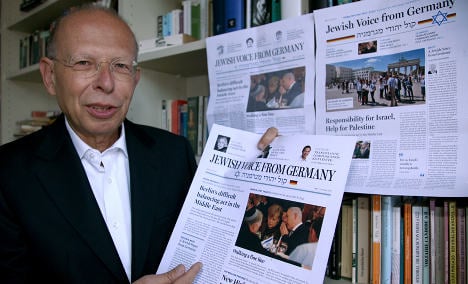 Rafael Seligmann has had a long and varied career in Germany’s media industry – he’s written for Die Welt and Bild and has had a successful tenure as an editor at the Atlantic Times newspaper.

But the 67-year-old’s latest project is his real labour of love. It’s called the Jewish Voice of Germany and the 30,000-circulation newspaper could give the country’s growing Jewish community a new voice.

“The Jewish community is something beautiful,” he told The Local. “It’s shouldn’t be a secret – Jews have a tremendous history in Germany.”

Seligmann’s idea is simple: Through the quarterly newspaper distributed around the world – including to the United States, Israel and Britain – he hopes to challenge stereotypes and raise awareness about the growing vitality of Germany’s Jewish community.

While the country’s Jewish community may be “terra incognita” to much of the world, it has a long and colourful history in the area that is today Germany, being found in historical records as far back as the 4th century.

Though often oppressed and forced to move, by the 17th century Jews were great contributors to German intellectual and economic life.

But they faced continued anti-Semitism over the centuries, culminating in the 20th century Holocaust. Roughly 500,000 were in Germany at the beginning of Adolf Hitler’s seizure of power in 1933. Almost none remained by 1945.

But genocide is not what Seligmann wants people to imagine when they think of Judaism in Germany. Today the community has rebuilt itself to about 200,000 people and Jews of German descent have found success in politics, business and the arts.

“We need to show that the Holocaust was not the end of Jews in Germany. We’ve had a renaissance here – there is a blossoming of culture happening,” he told The Local.

The idea for a newspaper to tell the community’s story to the world has been growing in Seligmann’s mind for several years.

An emigrant to Germany from Israel as a young boy, he loves his adopted country today. But he thinks the story of modern German Jews hasn’t been getting out to the world.

So nine months ago, he decided to invest his own money in the project and launch it himself. He recruited a team of about 10 staff members and got the German Foreign Office as well as numerous business and community leaders behind his idea.

The first issue of the Jewish Voice from Germany – featuring everything from a story on German Jews’ feelings toward Israel to a commentary on the future of the euro – began being distributed this week.

It’ll show up in community centres, mailboxes and in the offices of influential politicians. In the future it will report hard news, features on people’s lives and perspective and commentary on events in Germany.

And Seligmann is convinced it will soon be a voice no-one can ignore.

“Perhaps after reading the newspaper people will look at Germany in a new way,” he told The Local.