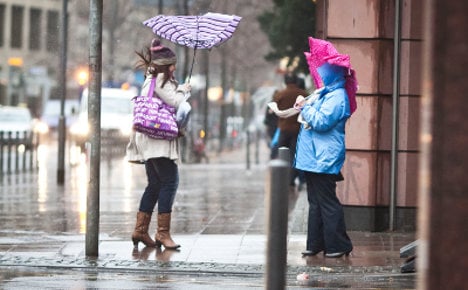 During Tuesday night heavy rain will soak the east and south, with thunderstorms bringing a wilder night to those up in coastal states. But the north west will escape with scattered showers.

“Low pressure from the Atlantic is rapidly making its way towards northern and central Europe,” said meteorologist Ansgar Engel of the DWD. “We’re in for a few very windy days this week.”

This widespread rain will be accompanied by gales battering inland areas of the north during the night.

“Wind speeds could reach up to 120 kph in areas of Schleswig-Holstein,” said Engel. “An average speed will be a lively 80 kph during the night.”

Mountainous areas will also be exposed to high winds. Temperatures will remain firmly above freezing though, with highs of seven degrees Celsius.

By Wednesday morning, the wind will have calmed down slightly, making way for a cloudy day with scattered, heavy rain, with snow in hilly areas. Temperatures will remain between five and 10 degrees.

Scattered showers will turn into more widespread rain Wednesday night, with especially heavy and prolonged rainfall in the north-west.

As with the night before, temperatures will remain comfortable, with only the Alps dropping to the freezing mark. Winds will pick up once more, however, with very high areas experiencing gales.

On Thursday, strong winds will be whistling up and down the country and may again reach gale speeds in flat areas. Mountainous regions are also expected to be treacherously windy with heavy snowfall. Scattered rainfall is expected over the rest of Germany.

By Friday the week’s wild weather will have calmed slightly for northern states, as the last day of the week is forecast to be clear and dry. The rest of the country will be faced with a few intermittent showers, but temperatures should remain mild.