“My client is innocent and of course she wants her case tried,” Schürrer’s lawyer Per-Ingvar Ekblad told the Expressen daily.

Since the verdict, Schürrer and her legal counsel have been putting together a 17-page application for leave to appeal, which they finally submitted to the Supreme Court (Högsta Domstolen, HD) on Tuesday.

After the initial guilty verdict by the Västmanland District Court in 2008, Schürrer and Ekblad took the case to the Court of Appeals, only to be told the verdict would stand.

At the time, Ekblad argued that there were no clear legal grounds for the conviction, and said he would seek leave to appeal to the Supreme Court.

He said the evidence presented did not meet legal requirements for a conviction and added that there was scope to argue his client had not been found guilty “beyond reasonable doubt”.

With the thorough new application, Ekblad believes there is a strong chance the case will be heard by the Supreme Court.

“Otherwise we wouldn’t have done it,” he told Expressen.

“Now we’re hoping for an acquittal.”

Christine Schürrer had been in a relationship with mother Emma Jangestig’s then boyfriend, Torgny Hellgren. According to prosecutors, her obsession with her ex-boyfriend served as the motive for the killings of the two children.

Investigators were never able to tie Schürrer to the crime scene with physical evidence. Instead, prosecutors based their case on strong circumstantial evidence.

Despite the lack of fingerprints or DNA evidence, the court ruled that there was “overall convincing evidence” against Schürrer.

A network of people have sought to help Schürrer in her case since the verdict, but Ekblad told Expressen that only he and his client had compiled the new application. 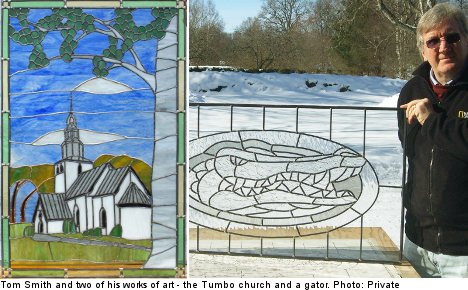 Hello! Before you read this, have you checked out The Local's new and revamped #MySweden series? Click here to find out how to take over our Instagram for a week and show the world your Sweden!

If you search online for information about Nannberga, you’d be lucky to find much.

The tiny Swedish village, located just 12 kilometres south-west of Arboga in the centre of Sweden, doesn't even get a mention on Wikipedia.

But for Tom Smith, a 61-year-old Scotsman who once had elaborate retirement plans featuring food, wine, and a farmhouse in France, Nannberga became a sudden and unexpected reality in 2006.

“I found out that I had heart problems when I was working as a teacher in the UK and had to retire at 54,” the pensioner tells The Local.

“You can’t very well drop dead in front of the children, can you?” he adds with a laugh.

SEE ALSO: Check out the latest home listings in The Local’s Property Section

His wife retired soon after, and with their son starting his own life with a Swedish wife and daughters in Nannberga, the retirees made an instant decision to jump ship and join their growing family in Sweden.

“I guess you could say we’re love refugees too, but not the usual kind,” he explains.

Now, the Scotsman spends his time teaching Swedes how to make stained-glass windows, something he took to himself in the UK “like a duck to water”.

Better still, he has almost cornered the market in Sweden, he says, partly because the art form is virtually non-existent around the country.

IN PICTURES: Check out Tom Smith’s art and find out more about his Sweden

Smith paints a fine picture of Nannberga itself, describing it as more of a community than a village, where the inhabitants of the “20 or 30 houses” are talkative and welcoming.

While many of the houses there are holiday homes, the 61-year-old says that a growing number of people are throwing in the white towel on their city lives and making the move to Nannberga full-time.

“And we are only 15 minutes' walk from the fourth biggest lake in the country, Hjälmaren,” the artist adds.

Better still for Smith, thanks to the layout of the village, he thinks he got a taste of France in the end anyway.

“There's a big, wide avenue leading through the village with trees on either side that gives a bit of a French feel to it,” he says.

“It feels like it could be France after all.”

And big city adventure is only a stone's throw away for the residents of Nannberga, with the bustling medieval town of Arboga and its 10,000-strong population just a short drive away.

SEE ALSO: Find your next home with The Local’s Rentals Section

“Heading there is like stepping back in time, into a village; most people know everyone else. It’s a friendly kind of place. You can’t go into a shop without people knowing who you are.”

But for now, Smith is keen to get on with his stained-glass lessons.

“Some of my students have been coming for two years; I think they enjoy the social side of it just as much,” he says.

“Halfway through the course we have a British cup of tea and a biscuit that my wife bakes.”

And with the courses held in English, Smith claims the Swedes can learn even more than just the art of creating stained-glass panels.

“I say they have to pay for the courses but the English is free,” he chuckles.

As for life in a small Swedish village, the 61-year-old couldn't be happier with Nannberga.

“It’s great here, the people are lovely. They try to help me learn Swedish, but always switch to English if I don’t understand,” he tells The Local.

“I've been told so much about Swedes keeping to themselves, but we've found the opposite – people have been very friendly towards us. People go out of their way to come and talk to us.”

So does that mean France is off the cards, then?

“Well, I have only good things to say about Nannberga. I wouldn’t want to live anywhere else.”