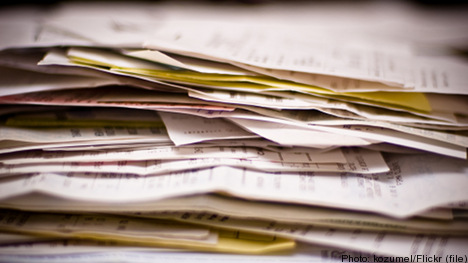 “I could never have guessed that the increase would be so steep. The rise is obviously the response to a demand. If people are paying, the fraudsters see how lucrative it is.”

Olsson added that the penalties for these types of crimes are often relatively low, which makes the risk seem well worth taking for criminals.

This particular fraudulent business has an estimated annual turnover of 1.3 billion kronor ($189.2 million), according to the National Council for Crime Prevention (Brottsförebyggande rådet, Brå).

Fake invoices currently make up about a third of the Stockholm city police fraud reports, but Olsson believes that the recent extensive media coverage will help police get to grips with the problem.

“I don’t believe this can go on now. Something will happen, it will be investigated on more occasions, and more attempts to get to the fraudsters will be made,” he told SVT.

“Because this is a problem for the whole society,” he added.

Although companies are the most common victims of this type of fraud, private citizens are also on the fraudster’s mailing lists.

One common way to trick people for money seems to be to call in a threat to pay for products that haven’t actually been ordered, another is to send out an “invoice”, which is really only an offer to buy something, if one reads the fine print.

Olsson advices people to contest any suspicious looking invoice, and refers to the Swedish Trade Federation website for advice on how to go about it.

He also adds that it’s important to report fake invoices to police so that they can continue their information gathering, building a case on possible fraudsters.

“If we get enough reports against a company committing a fraudulent act and if we can confirm by phone recordings that the agreement is questionable, we can bring the case to a prosecutor,” Jan Olsson told SVT.