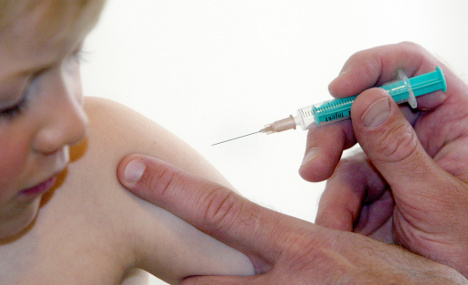 The number of infections in 2010 was just 780, the public health authority Robert Koch Institute (RKI) said in Berlin on Friday.

Among children starting school, 96 percent already have at least one measles vaccination – but the share of those with the all-important second jab is lower, at 90 percent.

“This shows that the measles vaccine is not being fundamentally rejected, rather that the second vaccination is frequently being forgotten,” said Burger.

He said he could not understand why parents sometimes refuse to get their children inoculated against the disease. “Measles is not as harmless as some perhaps think. In individual cases the illness can even kill, or lead to a lasting brain damage,” he said.

Eastern parts of Germany are better protected not only against measles but other diseases against which there is a vaccine, he said. But he added that social status could also affect vaccination rates. A study conducted by the RKI showed that families with higher social status tended to vaccinate their children more thoroughly.

Director of the Federal Centre for Health Education (BZgA), Elisabeth Pott, said that some social groups were of the opinion that certain childhood diseases should be allowed to run their course, to strengthen children’s immune systems – and thus do not vaccinate their children.

Germany is following the European trend in a rise of measles cases, with 14,000 cases reported in 2011 in France alone. Information from the World Health Organisation suggests that more than half the 26,000 cases in Europe affected people older than 15.

The RKI’s permanent commission on vaccination recommends that not only children be vaccinated against measles – but also all those born after 1970 who have not yet been vaccinated, get it done.