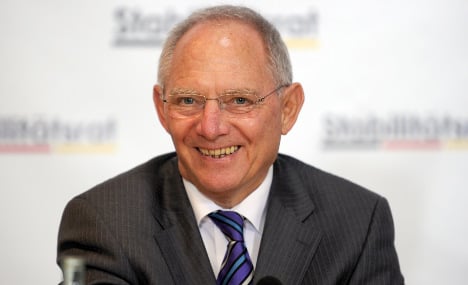 In an interview with the Handelsblatt newspaper, Schäuble said the continent’s leaders were “doing everything possible to prevent a falling apart” of the single currency.

“I think we will be far enough along in the next 12 months that we will have banished the dangers of contagion and will have stabilised the eurozone,” he told the newspaper.

Schäuble’s positive words come amid increasing concern about the future of Europe and its common currency. Some have questioned whether the continent’s leaders really have the will to institute painful financial reforms deemed necessary in 2012 to maintain economic stability.

Germany, which has had a relatively successful economy compared to its struggling neighbours like Greece, Italy or Spain, has been a voice of fiscal caution over the past months.

It has rejected calls to make the European Central Bank a lender of last resort for countries in crisis, fearing printing new money to purchase government bonds could lead to massive, unsustainable inflation. Instead, it has insisted that financially troubled countries have to institute serious austerity measures.

Schäuble himself has spoken out strongly against the creation of eurobonds, a scheme to pool countries’ bonds, which he said would violate European treaties.

In his Handelsblatt interview, Schäuble said refinancing European governments’ debt next year would prove to be a painful – but possible necessity.

“If necessary, a somewhat higher interest rate has to be paid for some government bonds,” Schäuble said.

But he said that might not damage economies. It could, in fact, “encourage the understanding that we have to attack the actual causes of the crisis: debts that are too high and a lack of competitiveness,” he told Handelsblatt.

Schäuble’s comments may be calculated to counter recent gloominess about the eurozone’s future in some quarters, which has led to unease in financial markets.

In an interview with the populist Bild newspaper earlier this week, one of Chancellor Angela Merkel’s advisors warned that such a euro-zone breakup “could not be completely excluded.”