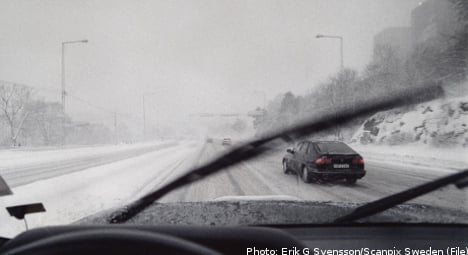 Freezing rain is expected to pour down over large parts of Sweden’s northern regions on Friday, resulting in a class 1 warning, the mildest of a three-step warning system, from SMHI.

A major crash was reported in Uppsala just after 1.30pm on Friday afternoon. Three people have been taken to hospital, but it’s still unclear if their injuries are severe.

“Five cars and a total of fifteen people were involved, but I don’t know how it happened,” said Mats Öjdahl, duty officer with the Uppsala police, to news agency TT.

Local bus traffic has come to a standstill in the city of Östersund, in northern Sweden, as has much of regional bus service in Jämtland, due to sudden black ice formed by freezing rain, local media reported.

Several trucks on highway E14 between Trångsviken and Mörsil have also been stopped by the icy conditions.

The northern areas of the country are those most likely to have Christmas traffic problems because of the weather.

“There’s foul weather all over Norrland. Rain clouds are headed east during the day, and inland regions as well as coastal ones have major risk of freezing rain falling on cold roads,” said SMHI’s Lisa Frost to TT.

In mountainous areas in the Jämtland region, winds of up to 54 kilometres per hour are expected.

Later on Friday night, the rain and snow is expected to head further east towards Finland.

Weather conditions are looking far better in Sweden’s southern regions, at least from a traffic perspective.

“It’s really mild there right now. The temperature is several degrees above freezing, and it’s going to stay that way all day. It’s going to be cloudy and slightly foggy, and there may be some light rain in most parts of Götaland and Svealand today,” said Frost.

However, those hoping for a white Christmas in Sweden’s southern regions may be left with their wishes unfulfilled.

According to current forecasts, which show that the snow which has fallen during the week looks set to melt away with the rain and mild weather.

“Southern areas will have some really mild weather. And it looks like Christmas Eve will be sunny in many areas around the country,” Frost said.

“It looks to be a green Christmas for most of those in the south.”

Friday is a busy travel day in Sweden, as Christmas Eve falls on a Saturday this year.

Since 2001, an average of 1.7 people have been killed annually, and 73 people injured, on December 23rd, according to statistics from the Swedish Transport Administration (Trafikverket).

“We definitely don’t recommend people to drive on smaller roads to avoid slippery large roads. Instead, we urge everyone to drive slowly, plan their trip and plan for pauses. Count on not being able to drive at 90km/h, no matter what the speed limit says,” the administration’s Jonas Bengtsson told newspaper Expressen.

The Swedish Transport Administration also advises Christmas travellers to be well-rested and sober, and to make sure everyone in the car wears a seat belt.

In winter conditions, the car ought to be equipped with ice scraper, snow shovel, jumper cables, warm clothes and a charged cell phone.