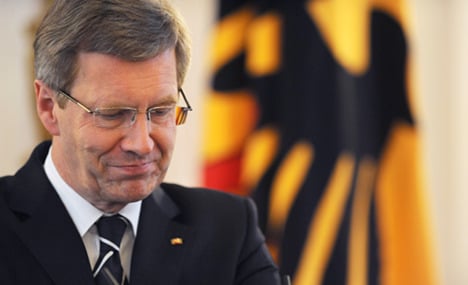 “It wasn’t forthright and I’m sorry about it,” Wulff said in a televised address from his official residence in Berlin. “I have the need to address this matter. It’s about trust in me and my office.”

Wulff reiterated his earlier statement that he should have revealed more to the Lower Saxony parliament about the extent of his financial relationship with a businessman. Last week, it emerged that he had taken a €500,000 loan in 2008 from the wife of businessman Egon Geerkens while state premier yet failing to tell the parliament about it.

“I realise how this might be perceived,” he said.

But he denied that business relationships had influenced him during his term as Lower Saxon premier between 2003 and 2010 or as president, the largely ceremonial post he’s had since last year.

“I say clearly: I never afforded anyone preferential treatment with my public office,” Wulff said. “I ask for the continuing trust of citizens.”

Anger intensified this week when it emerged that another businessman Carsten Maschmeyer paid to promote a book by the Christian Democrat Wulff in 2008 while running for re-election in Lower Saxony. Maschmeyer has denied that Wulff may have known of his involvement.

Chancellor Angela Merkel has so far pledged her complete support to the president. But some German politicians have already begun calls for him to resign.

Though there have been suggestions that Wulff broke the law in his business dealings, prosecutors said Thursday that there was no proof of criminal wrongdoing.

The president’s former spokesman Olaf Glaeseker has been replaced by a deputy for the time being, according to the president’s office.