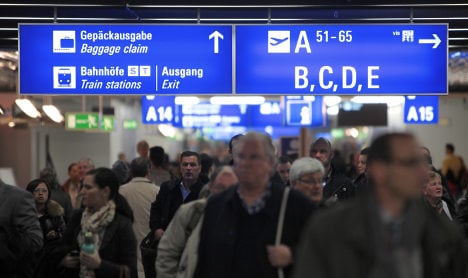 The eurozone’s top economy had a 19 percent rise in new arrivals with 435,000, the federal statistics office said in a statement.

“What is notable here is the strong increase in immigration from EU countries that have been particularly hard hit by the financial and debt crisis,” it said.

More recent members of the EU, mainly former communist countries in eastern Europe, also sent about one-third more citizens to live in Germany than a year back, due largely to a relaxation of labour market restrictions.

Other European countries, Asia and the Americas boosted emigration to Germany 11 percent each, while Africa was responsible for a three-percent rise.

With unemployment falling to 6.4 percent in November, its lowest level since reunification more than two decades ago, and around three-percent economic growth, Germany has weathered the eurozone crisis largely unscathed so far.

It is actively recruiting skilled labour abroad to plug gaps in the workforce and offset a steep population decline caused by a low birth rate.

But despite the increase there continues to be widespread concern that not enough is being done to fix the country’s labour shortage as the workforce ages. According to one study earlier this year, there could be 3.5 million unfilled jobs nationwide by 2025.

A government report this month said Germany still needed to streamline immigration laws and present a friendlier face to the world in order to attract more skilled workers.